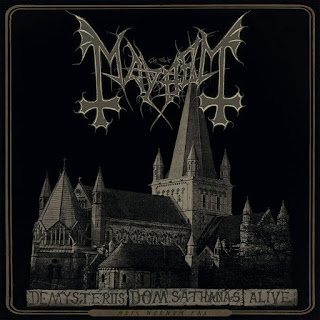 It was with great anticipation that I marked February 2nd on my concert calendar as the mighty Mayhem were coming to town to perform, "De Mysteriis Dom Sathanas" in it's entirety.  Rounding out the bill with Colombia/Seattle's Inquisition and New York's Black Anvil, El Corazon was going to be blackened in more ways than one.

Even the casual metal fan has heard of Mayhem, basically due to their controversial past.  The diehards know every detail about the various lineup changes, deaths, change in musical directions, and every other aspect of the band over the last three decades.

One thing I noticed while waiting outside in the cold, there was a strange mix of fans at this show.  A couple behind me looked like they just stepped out of a Gap ad while inside the venue I overheard a couple and their young son describe Mayhem as death metal, not black metal.  I saw a few other fans inside that seemed to be there more out of curiosity than anything else.

Of course there were the old school fans, too.  Various black metal band shirts, jean vests with patches, etc. were also on display.

Exactly at 8pm, the house lights dimmed and Black Anvil took the stage.  The NY four piece, decked out in corpse paint, ripped through a 30 minute set of music that was black metal, with other influences as well.  They got a warm reception from the Seattle crowd. 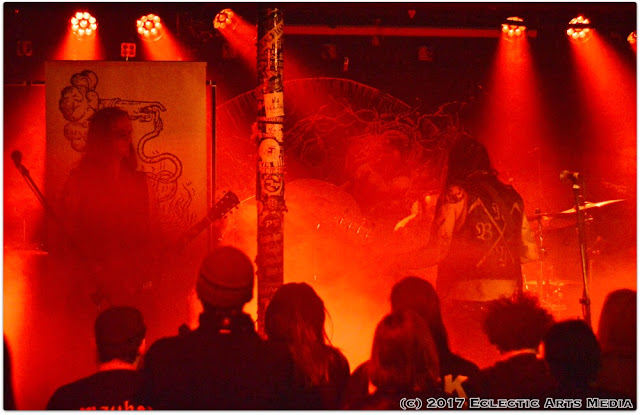 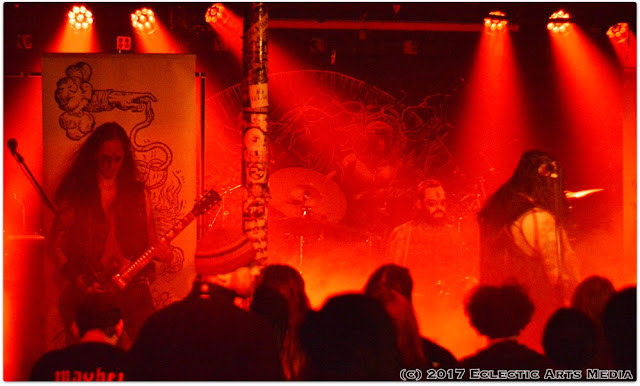 Inquisition were up next and they got the pit going for the evening.  Full of atmosphere, the duo blistered through their set of more traditional black metal (which I appreciated).  The pit never let up during their set and the band sounded on fire.  Perhaps the wait (due to not being able to perform in Canada) made them anxious to perform once again on this tour.  Having relocated to Seattle many years ago, the now hometown band made a statement with their set. 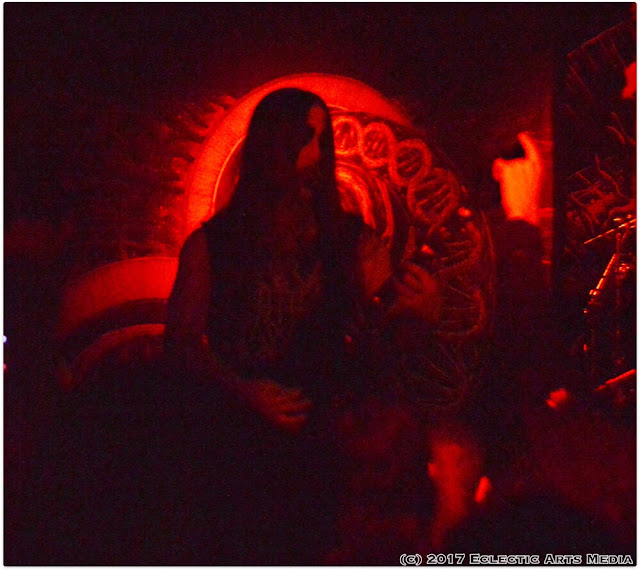 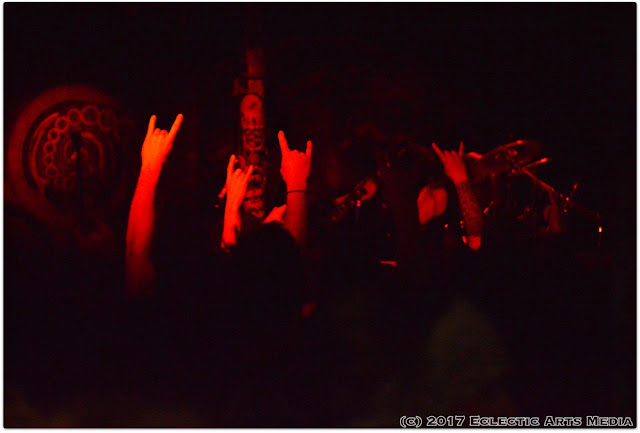 After a brief changeover, the stage was set with additional banners and props.  A message from the band was played over the PA requesting fans not use their cellphones as it affects the atmosphere.  It also said if you really needed to use your phone, to not use your flash or flashlight,  This was the first gig I can remember where such a message was played.  Some fans cheered as the whole phone thing has become annoying at some shows while other fans put their phones up as soon as the house lights went black, 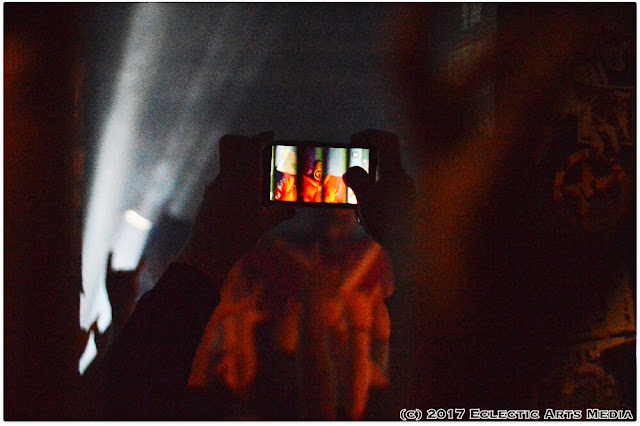 Having read and known about the band's history ever since I got into black metal, I couldn't help but have all of that play through my head as the fog machines kicked into overdrive and the atmosphere on the stage went dark black and blue. 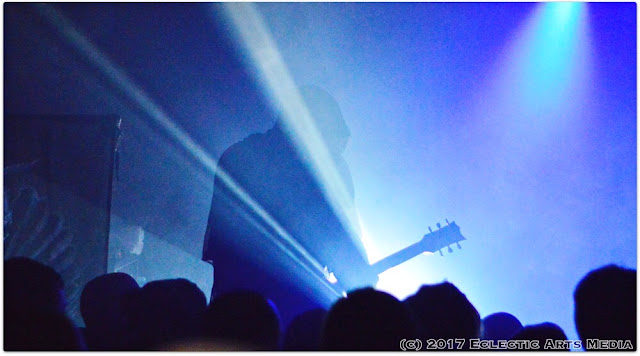 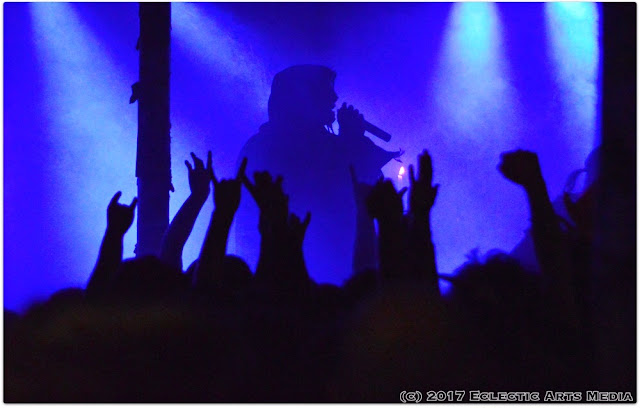 Hellhammer took his spot behind his massive drum kit, and then the other band members took the stage decked out in hooded robes.  Attila was the last to take the stage as they launched into, "Funeral Fog".  The place went nuts as the backlit band played each of the 8 songs from the album in order. The pit was as ferocious as the music emanating from the stage.  Attila's tortured vocals added so much to the dark atmosphere that you couldn't help but be transported back to 1994. 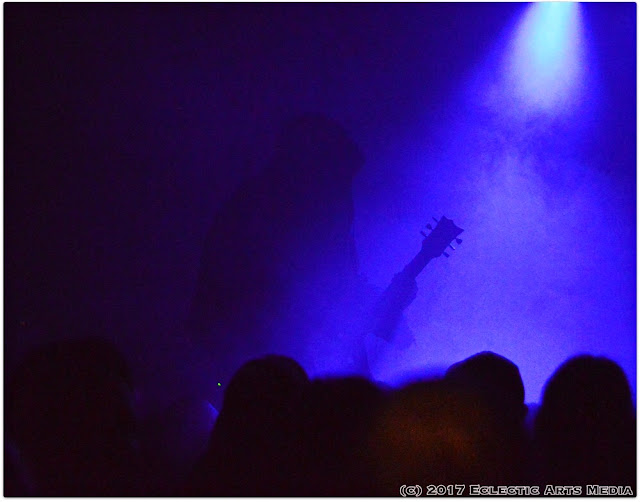 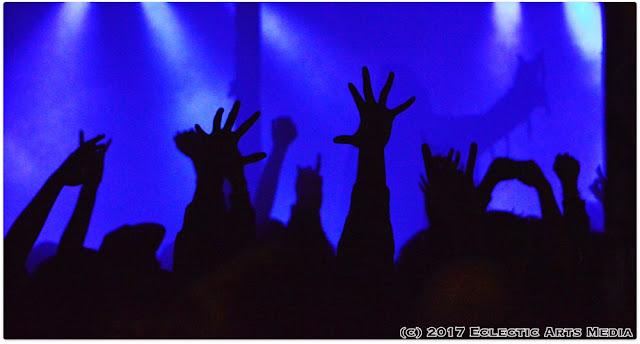 Instead of playing a few other songs from their catalog, Mayhem opted to make a statement by only playing "De Mysteriis..." in it's entirety.  No encore.  To the point, while full of atmosphere, they saluted the crowd, with Attila being the last to leave the stage.

The crowd left El Corazon satisfied.  I know I did.  The True Mayhem showed that they are still one of the pioneers in the realm of black metal.

Special Thanks:  Liz for the credentials and Enrique for the communication.  Thanks! 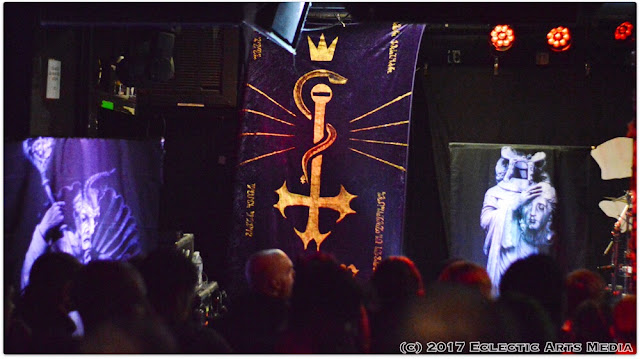 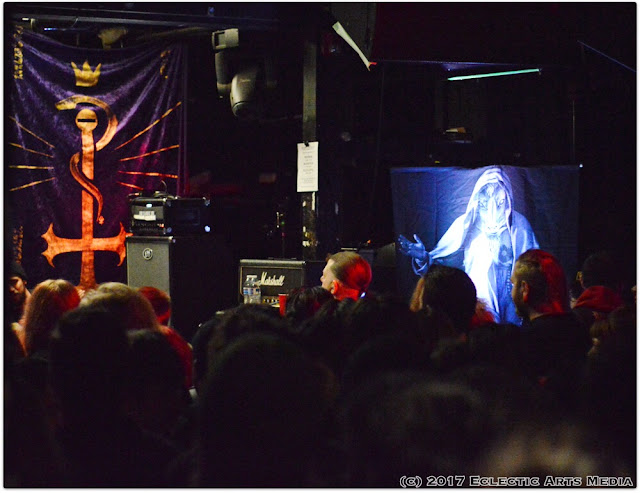 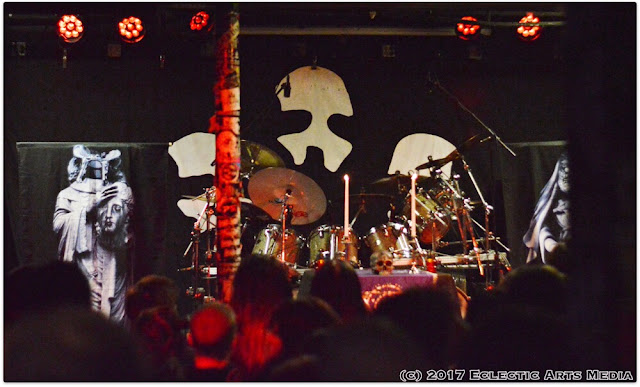 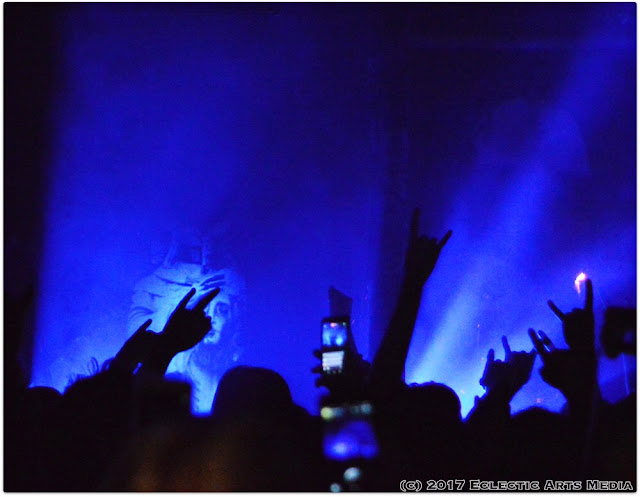 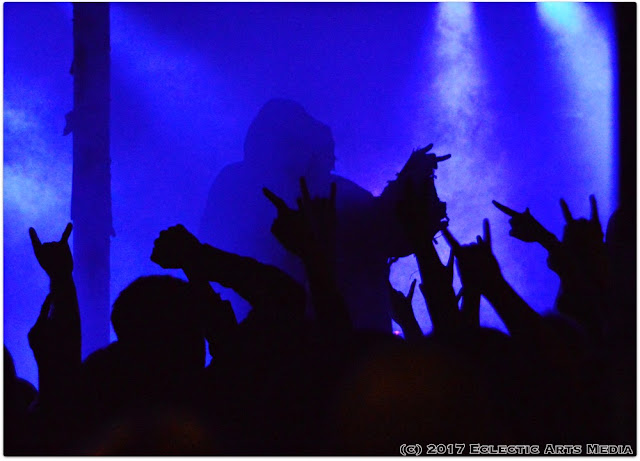 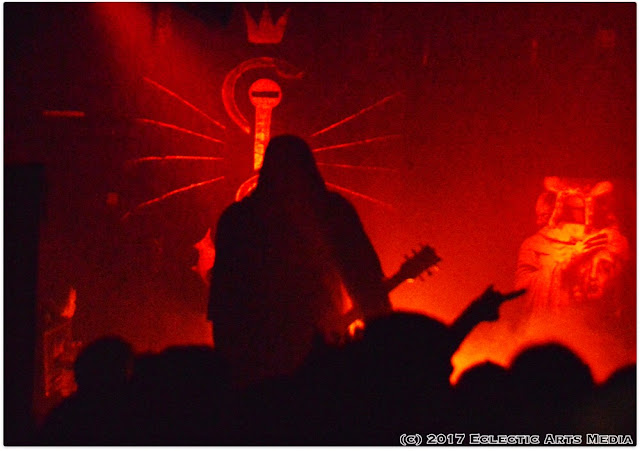 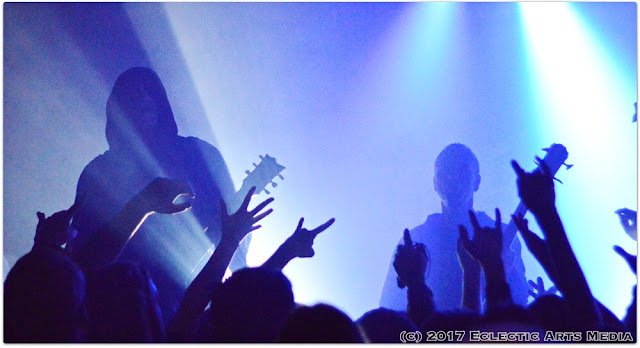 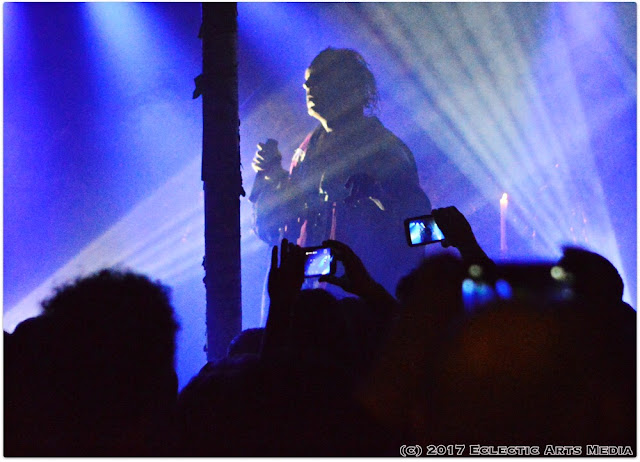 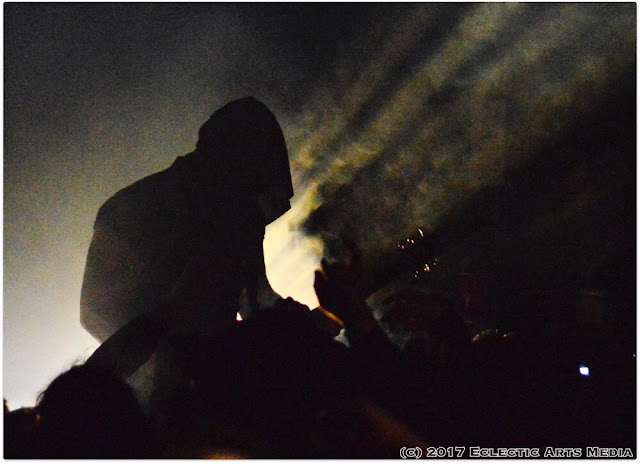 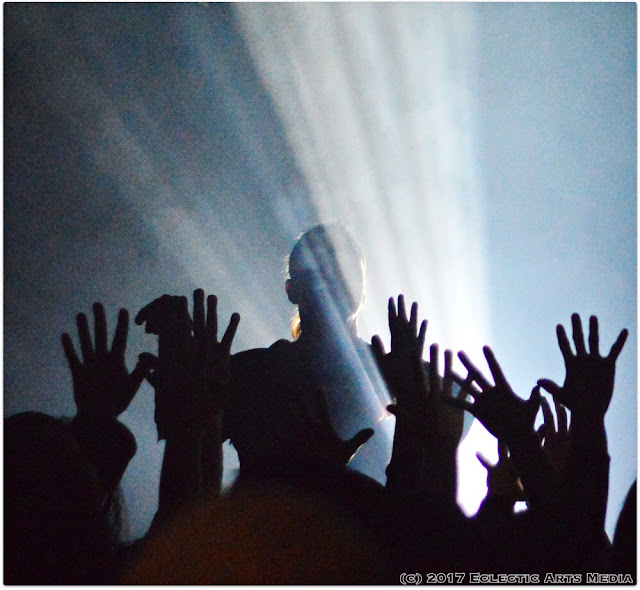 Posted by Eclectic Arts at 1:49 PM