SEATTLE SYMPHONY
Harry Potter and The Goblet of Fire 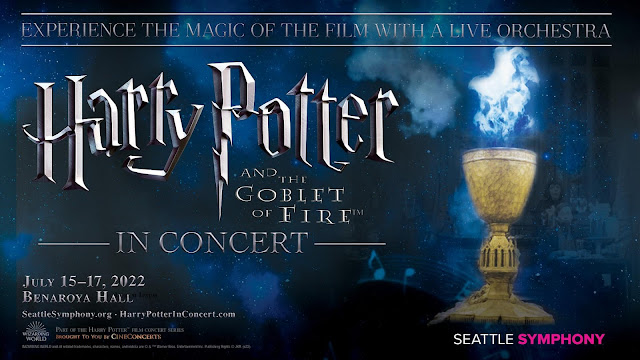 The Seattle Symphony is consistently looking for new ways to broaden their audience as well as introduce new patrons to the world of live classical music. Pre-pandemic the Seattle Symphony was producing a selection of events that partnered film with a live concert of the actual score. I raved about the concept back then and I am happy to say I can still rave about it in 2022.


For the uninitiated, the chosen film will screen above the symphony with closed captioning playing as well (in case you can’t quite hear what a character says) while the Seattle Symphony recreates the original score note for note along with the film. It is a breathtaking way to view a film. I wish every film could be seen in this format.


"Harry Potter and The Goblet of Fire" was the film of choice and of course it brought out many a Harry Potter fan - both young and old.


Other than one intermission, the film was played just as you would see it in the theater or at home - with, again, the addition of the world class Seattle Symphony playing the score.


Another fun aspect is that with these screening events, it’s perfectly okay to cheer and boo the characters as they appear on screen. The event is supposed to be fun so be sure to bring your fun side to Benaroya Hall any time you come to one of these events.


Sarah Hicks conducted the Seattle Symphony with ease that only a true maestro can. She brought the original score to life without venturing off course which was appreciated by the audience.


If you’ve never been to an event like this, I implore you to take a chance on basically any film that they do this treatment to (unless you hate the film then even this treatment probably won’t change your mind). If you like the film, think the film is only okay, or are unfamiliar with the film - go see a performance. Trust me on this one.


You’ll be glad you did!