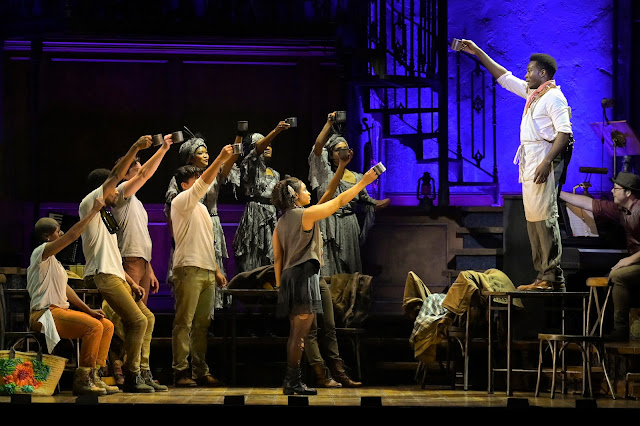 The winner of eight Tony Awards in 2019, “Hadestown” came to the Paramount Theatre on Tuesday evening with much buzz and expectation surrounding it. The Greek mythological story of young love between Orpheus and Eurydice, this reviewer went into the night knowing next to nothing about the show.


The story is a bit of a mess if I’m being honest. Is it a mess because I don’t know the details regarding Orpheus and Eurydice? Possibly a fair statement. Or is it a mess because the story is written that way? Hard to say. All I know is that the ideas presented within the musical were hard to suspend disbelief for.


The music itself had some hits with an equal amount of misses. Please keep in mind I’m not talking about the performances but the actual material. I can see why some of the songs are beloved already and deservedly so. But, there were plenty of other songs that weren’t on the same level as the “hits” and it showed.


The staging was great to start with but if you’ve been to any of the Broadway At The Paramount shows since the return to in-person performances, you know what can be done with a touring musical these days. This is an area where “Hadestown” fell noticeably short. Other than a change with the building at one point during Act I, the set didn’t really change much. Yes, the lighting design was effective and the circular part of the stage was cleverly used as well but overall I really wished there would have been more state of the art scene transitions, backdrops, effects, and the like.


The performances on stage were noteworthy, though. This is the area where “Hadestown” scored some points for sure. As an ensemble piece, the performers worked well together and each got their moments to shine on stage. The use of falsetto so often was a bit annoying to me at times but that’s a minor quibble. I’m sure many in the audience were the opposite and loved hearing the high notes.


Overall, “Hadestown” had its moments but with the accolades it received, I thought I was going to like it more than I actually did. There were clearly patrons in the audience that would vehemently disagree with me and that’s okay. What resonates with one may not resonate with another.


I will add that seeing a cast made up of many BIPOC was and always will be a grand sight to behold in any artistic space. But, again, from a pure enjoyment perspective, “Hadestown” left me wanting more but not in the way great shows do. Perhaps you’ll feel differently after you’ve seen it in-person.