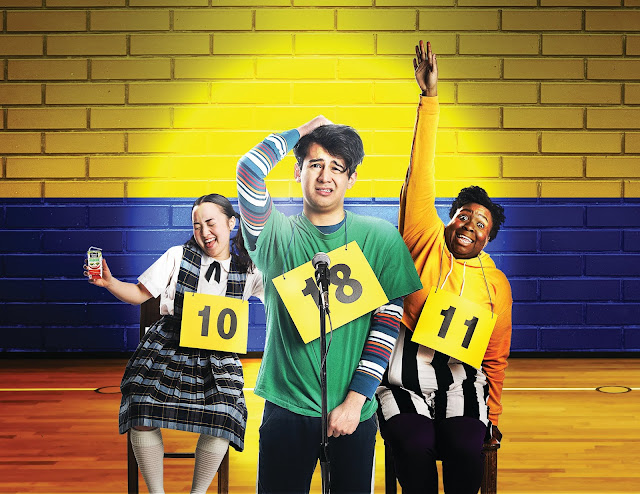 I was a participant in one spelling bee in elementary school. I didn’t win. I don’t even remember what word I misspelled. I do remember being nervous and excited at the same time. The season kick off show for the Village Theatre this season (their 40th) was all about a group of spelling bee contestants. The show also incorporated a few audience members that volunteered to be a part of the show.

“The 25th Annual Putnam County Spelling Bee” was brightly staged in the Everett Performing Arts Center. The stage resembled a high school auditorium complete with painted brick walls, bleachers, a desk for the judges, and other assorted school decor (including banners on the walls of the venue).

As directed by Brandon Ivie, the show was well paced and intermission free. The widely diverse cast of characters were individually unique which made for some very funny moments.

I was familiar with a few cast members from other shows. Brian Lange was decisively amazing as vice principal Douglas Panch. Arika Matoba was another familiar face as the high achieving and misunderstood character of Marcy Park.

The cast across the board sang, acted, and entertained like a professional ensemble with no weak links whatsoever. Jessica Skerritt as Rona Lisa Perretti started the show and was covering all sorts of bases with her character. When she wasn’t delivering witty lines, she was singing lead, ensemble, and background to other characters numbers. 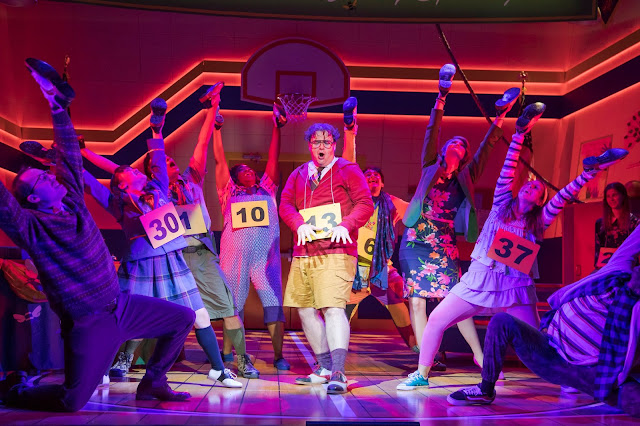 
The use of audience members made for an interesting addition to the show. Three of the four were eliminated from the spelling bee rather early. One member however was on stage for a good chunk of the production. She rolled with the punches and eventually lost her place in the bee as well.

One thing I’ve noticed with the shows at the Village Theatre is that they are of a certain quality. Regardless of the material, the acting, staging, lighting, and direction among other things is always top notch. This show was no exception. It was a strong production throughout.

I do think that an intermission may need to be considered for future shows that are 90-minutes or longer. This is the second show I’ve attended where there was no intermission. For me it’s not really an issue. For some of the older audience members, or those with small bladders, it becomes a test of how long can you “hold it” which is never good. Plus, it allows for more concession sales.  Just a very minor suggestion.

Overall, “The 25th Annual Putnam County Spelling Bee” was entertaining and incredibly well done. You will be entertained for sure when you see a performance!

See you at the theatre,
Mark
Eclectic Arts
EA on FB
EA on IG
EA on YT

Thank you to Ann for the opportunity. I appreciate it!
VILLAGE THEATRE OFFICIAL SITE 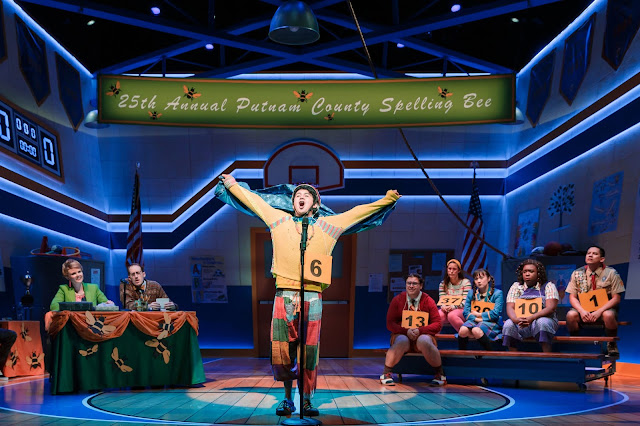