It Could Be Any One of Us 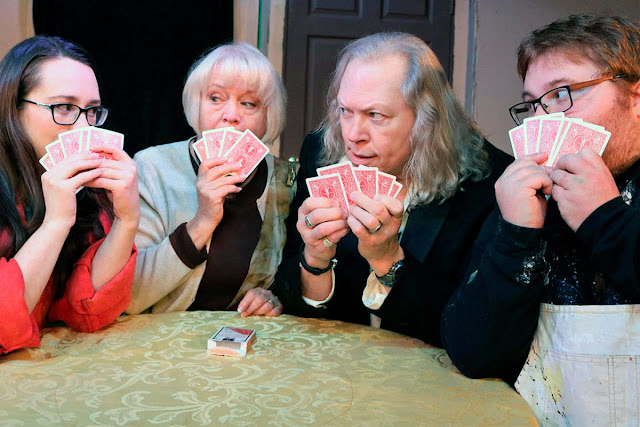 I had the opportunity to catch a performance of, "It Could Be Any One of Us" at the Phoenix Theatre in Edmonds. The snow event forced the cancellation of a few performances (including mine) so I was glad to be able to see the show before it closed.

The show is unique in that each performance has a different ending based on the outcome of a scene early in the production. So if you see the show back to back you most likely will see an entirely different ending.

The motives pile up as the show continues on before a murder is committed. As always, I don't like to give away too many plot details - I'd much rather the ticket buyer go in as fresh as possible.

Susan Connors shows yet again just how good she is (I saw her in December in "Twist of the Magi"). Effortless and completely believable as Jocelyn, her performance was noteworthy for sure. I enjoyed every second of it.

Tom Cook took a bit of getting used to for me. His portrayal of Norris Honeywell grew on me as the show continued. By the second act he was in fine form.

Cristina Devrin as Wendy worked from the moment she arrived at the Chalke's family residence. Her physical/non verbal comedy worked very well and her character stood out enough to make the audience believe she was in great peril.

I liked what Curt Simmons brought to the table. I would of liked to have seen a stronger wardrobe design for his character but that's nitpicking.

James Lynch brought humor to his role as well as an accent that reminded me of Frodo in Lord Of the Rings.

Sydney Kaser did the best she could with her character - which was perhaps the smallest of the cast. She had a few spotlight scenes in the second act that showed a lot of promise. I'd like to see her in a more substantial role to really see what she can bring as an actress.

Overall, the show kept my interest and, no, I didn't guess correctly whom the murderer was. Perhaps if you saw the show you were more successful than I.

The house was nearly full Friday evening with a crowd of regulars who knew each other. The Phoenix is a small business and it's great to see people supporting the theatre - especially this show as revenue was lost due to snowmageddon. For a large theatre they can weather that kind of storm (pun intended) but for a smaller theatre, every dollar counts.

The next show up is "Ripcord" from March 29 - April 20th. Come out and support a great local theatre!

Posted by Eclectic Arts at 1:14 PM