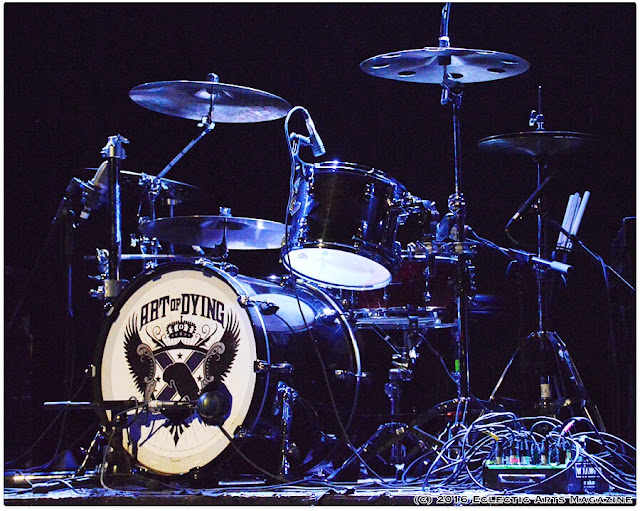 Tuesday evening brought in a tour of up and coming bands to Studio Seven, here in Seattle, WA.  Art of Dying has been slugging it out for quite a few years now, building up their audience the best way they can; touring.  Each new fan adds to the audience that will continue to support them as they make their way up the musical ladder.  Children 18:3 and Letters From The Fire are also out there staking their claim in the musical world as well.  Tours like these are great for fans that catch them.  You can say "I saw them when" sort of vibe.  Tours like these for the bands are a test of dedication and endurance.  The audience is hit and miss.  With it being a Tuesday evening, the audience in Seattle was, dare I say, a miss.

With less than 50 people in attendance, the local openers The People Now took the stage.  The three-piece (their bassist was recovering from surgery) played a very interesting mix of music for 30 minutes.  Melodic rock with an assortment of other influences, I enjoyed their set.  I think if they had the backing ($), they would like to add to the visual element of the band to create an overall assault on the senses. 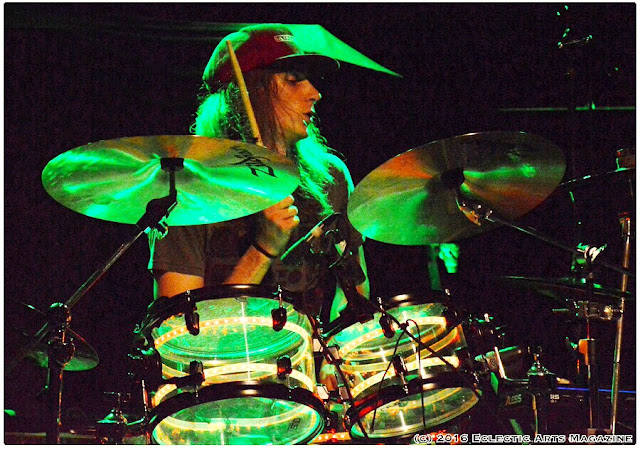 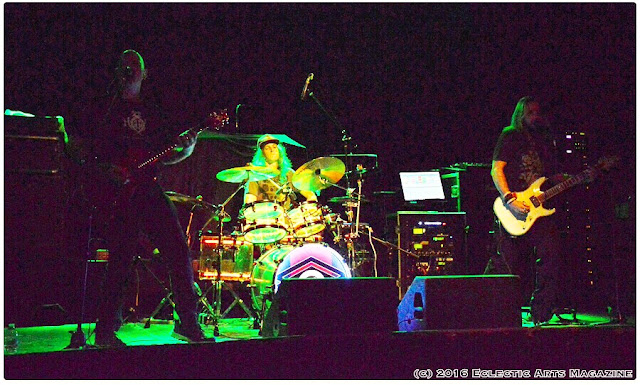 Hailing from the Bay Area, Letters From The Fire set up and blasted into their 30 minute set.  Fronted by new vocalist Alexa, Letters From The Fire got the energy up.  The small crowd that was hovering in the back moved toward the stage as their music pummeled the audience.  I was very impressed with the bands attack and Alexa's vocals.  I'm a sucker when it comes to seeing a band for the first time and finding out there's massive potential there.  Again, that mentality that I got in "on the ground floor" has always been appealing to me.  The lyric video from their first full length, "Worth The Wait", a lyrically intense ballad called, "At War" was surprisingly aired during their set.  Had I not been taking photos, I would have filmed the performance of that tune.  It is haunting in its musicality and gut wrenchingly painful lyrically.  A beautiful tune that I would love to hear the band do acoustically as a performance video.  I think there is a massive opportunity for this particular tune to reach a wide audience.  Excellent set by a powerful band.  These guys/gals are on their way up! 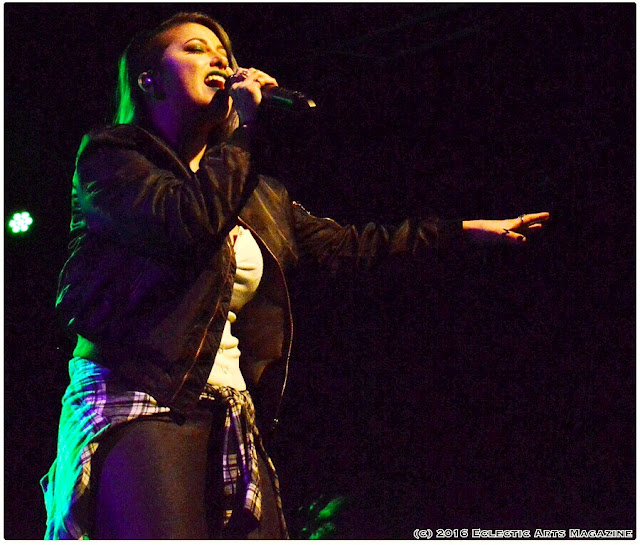 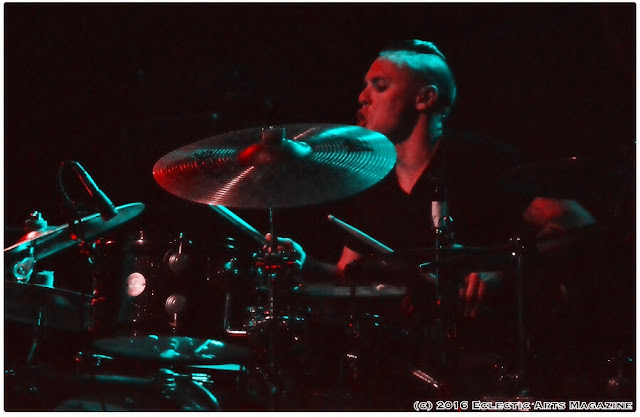 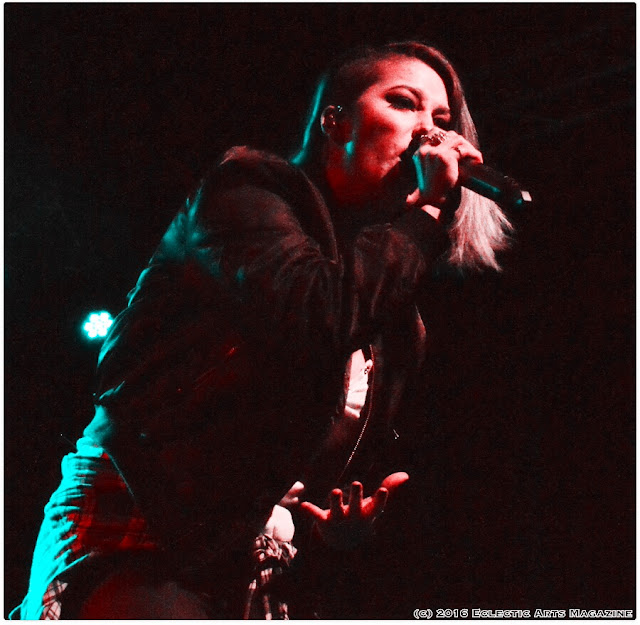 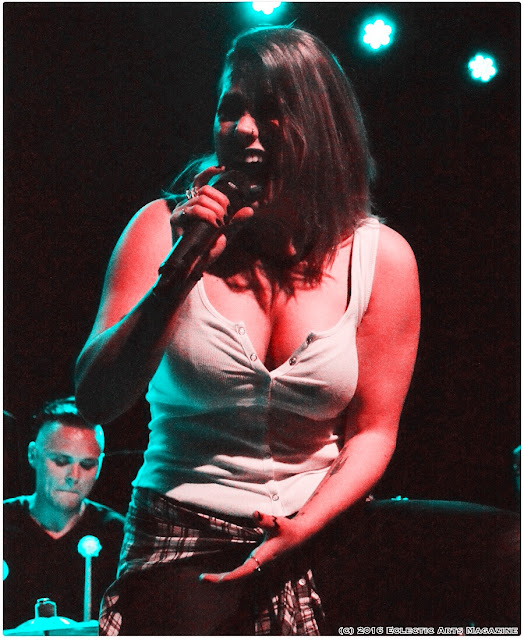 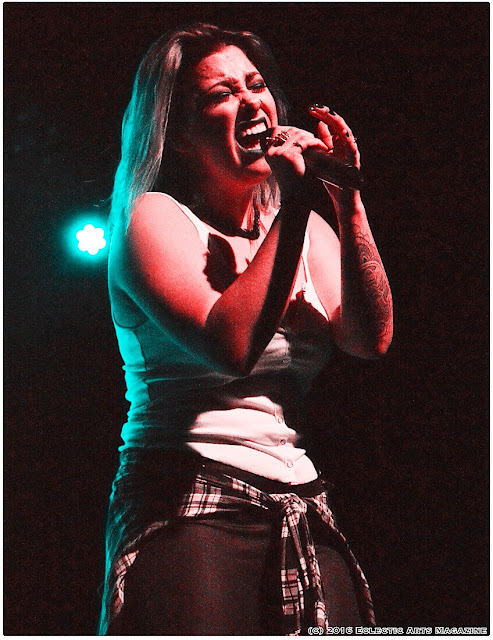 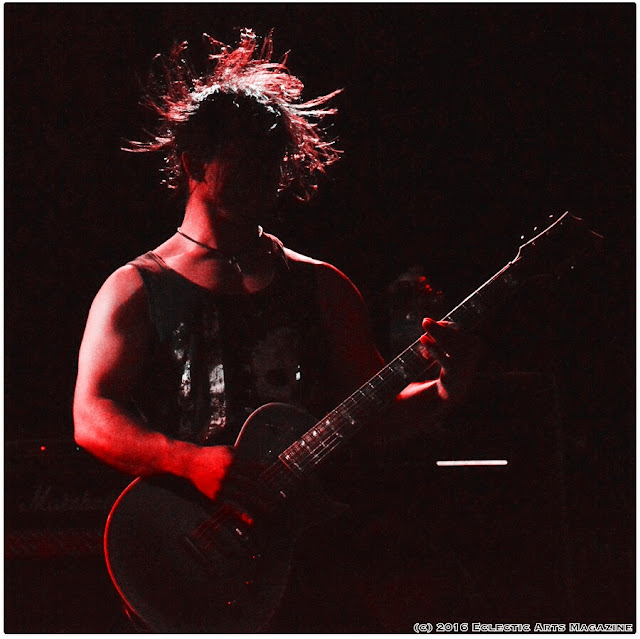 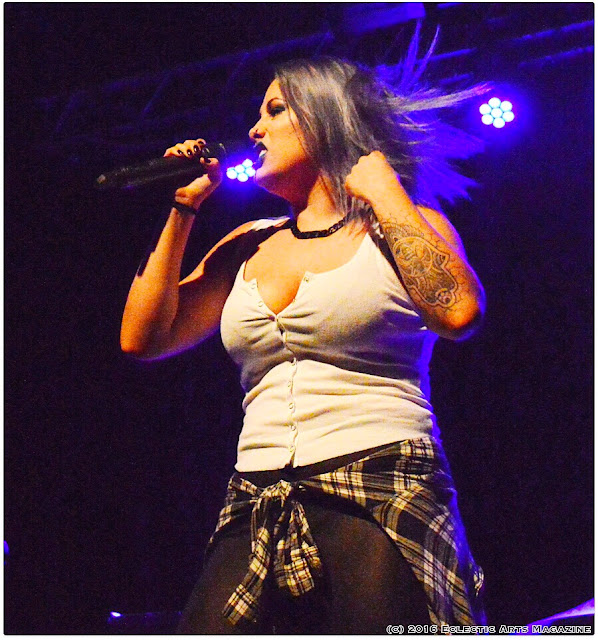 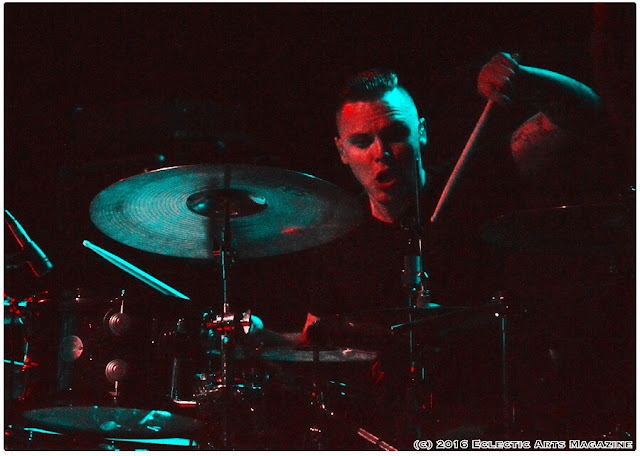 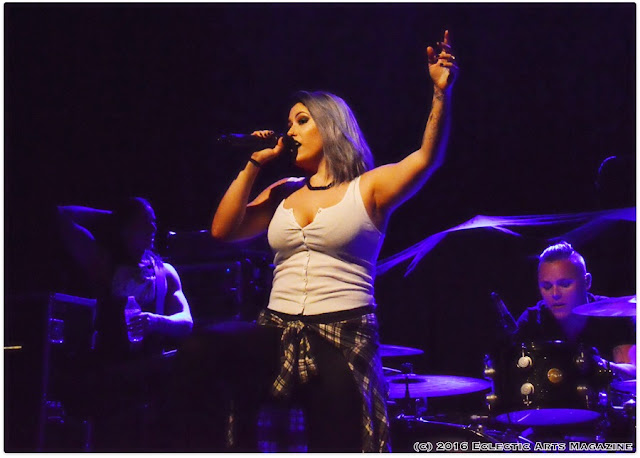 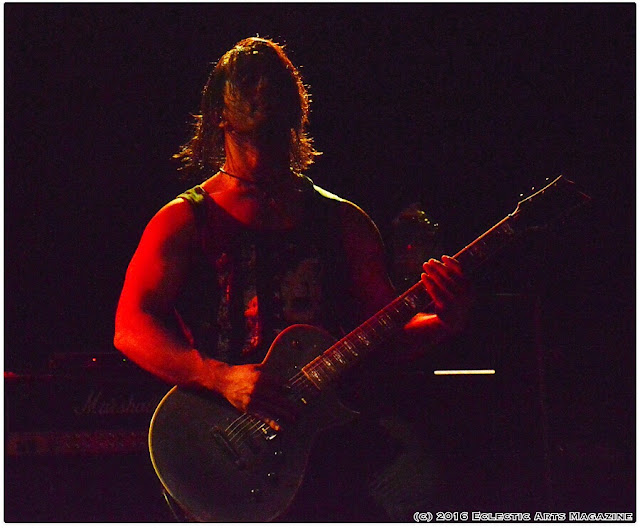 Third band of the night was Children 18:3.  A trio that played an interesting mix of rock and pop and heaviness at times, they were full of energy as they executed their 30-minute set.  A rocking self proclaimed Christian band, Children 18:3 kept the energy up and the audience was receptive to their music - Christian or not.  I could of done without the drum solo toward the end but overall they were a nice addition to the bill. 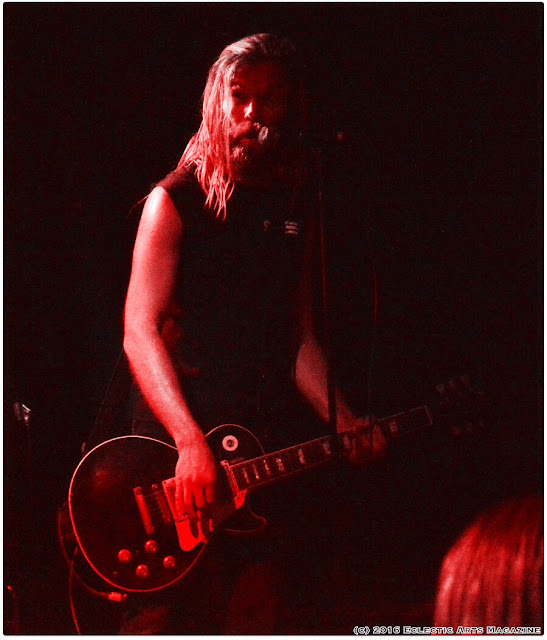 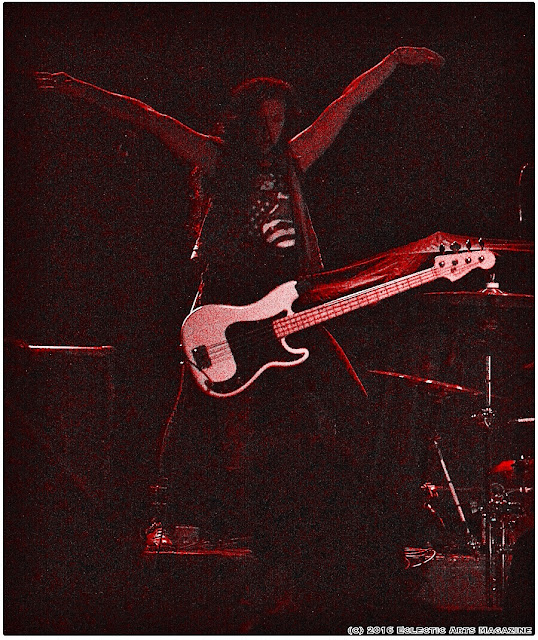 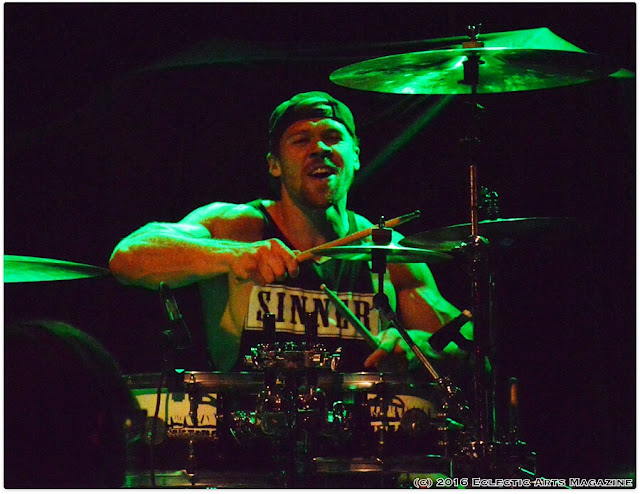 Lastly, Art of Dying took the stage.  The four piece is promoting their new release, "Nevermore", and there were definitely some die-hard fans in the audience.  Singing along to most, if not, all of the tunes, Art Of Dying was extremely professional sounding.  I can't tell you readers how much I enjoyed hearing the three part harmonies on some of the tunes.  Actual singing blaring through the PA was a welcome sound to these ears.  While the majority of their set (all but one tune actually) was rocked out, they did an acoustic version of "Best I Can" that I absolutely loved.  Great lyrics, melodies, and those harmonies made a believer out of me. 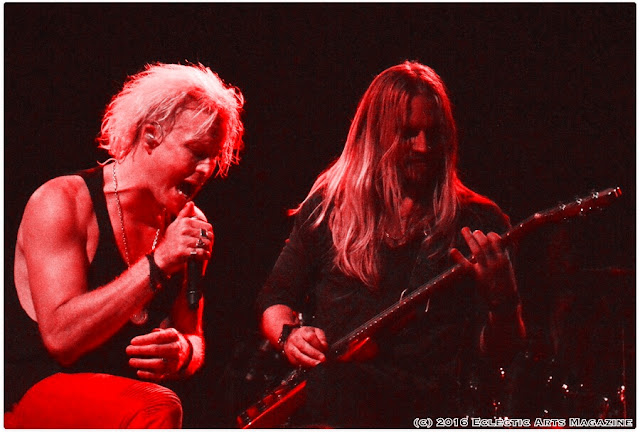 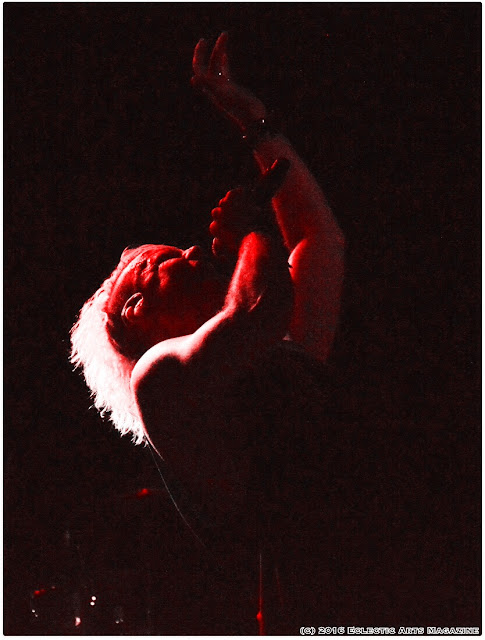 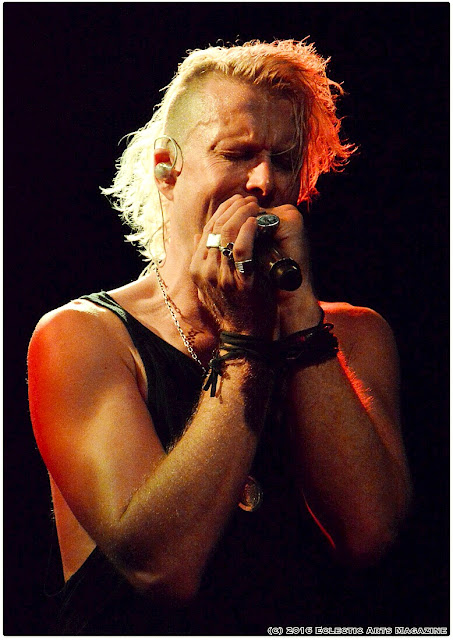 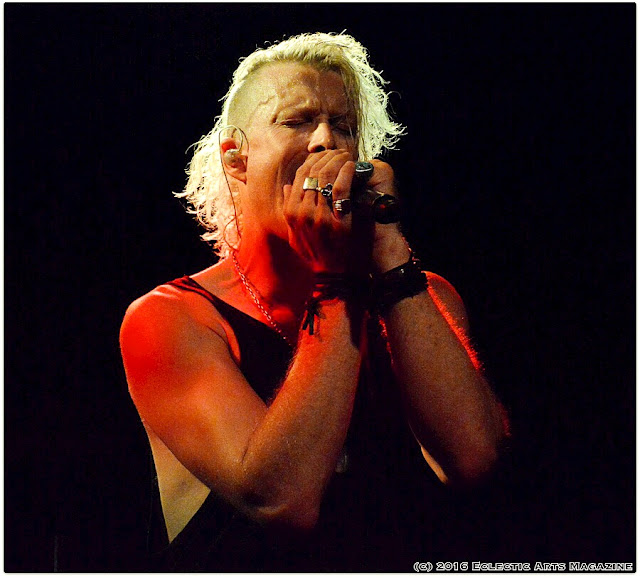 All the bands on the bill were extremely friendly, down to earth, and doing what they could to spread the word about their respective bands.  The small crowd that witnessed this bill saw some bands that will be coming back to town on bigger bills, at bigger venues, and with larger audiences for sure.  I was glad I made the trek down, especially considering I was sick at the time.

A side note:  I've been covering bands non-stop this year for EA.  A word to anyone that checks out a band live:  first - thank you for going!  Live venues around this area are closing their doors.  Fans are just not going out to see shows as often as they used to.  Second - when you go, if you can, support the band(s) you liked by buying something from the merch table.  These bands are not living large by any means.  If anything, they're living like roaming vagabonds in a 15 passenger van, Sprinter, or if they're lucky, a bandwagon.  The bigger club bands may be in a tour bus but even still, they're not making money hand over fist.  They're driving hundreds of miles between shows, loading in, loading out, and driving to the next town.  The part that makes it worthwhile is the time they spend playing the music they love to an audience.

I'm preaching to the choir for the most part but if you can afford to, and again you like what you heard from a band, pick something up from them.  The music industry isn't what it used to be.  When you have to sell 35,000 copies of your new CD just to break it even, or for bigger acts over 100,000 copies, that's a daunting and nearly impossible task these days.

I've been trying to bring friends to each gig I cover.  Potential new fans, I feel this is one of the ways I can support up and coming bands when they hit my town.  Spreading the word through EA is another.  And, yes, buying merch is another.  I bought a CD and shirt at this gig.  I would of bought more if I could of afforded it.  But, hey, it's something and every sale helps.

If you see me at an upcoming gig, say hello!  I love talking music with fellow music junkies.  Until the next show …

Thank you to:  Tom G. for the credentials!  I'm glad I finally found another concert to cover for your firm!

Letters From The Fire Official Site