Sunday afternoon brought good news - I had been approved to cover the sold out Kiefer Sutherland show at the Tractor Tavern!  Now - let's be honest - if his name was Kiefer Jones or anything else but Sutherland, would the majority of the fans still be at the show?  This is always the rub for any actor that is also a musician.  Some music projects are looked at as pure vanity projects while others are sincere representations of multi talented artists.

This was anything but a vanity project Sunday evening.

The litmus test for me when attending a gig where the artists is better known for their other job/career is easy - would I go see this artist if they weren't known as an actor (in this case)?  Would I enjoy the music for what it is?  Would I recommend it to my friends and colleagues?

I arrived at the Tractor Tavern early or so I thought.  I figured there would be a good-sized line outside before the doors opened at 6:30pm.  The hardcore fans of Kiefer's acting work would be lined up, ready to get as close to the stage as possible.  Even though I was early to the venue, there were at least 75 - 100 people already there.

Conversations in the line were basically the same - how much people loved Kiefer's television and film work.  Most had no clue that he sang songs or had a band.  There were a few exceptions of course but not many.  Several passerby's asked who was playing tonight once they saw the line.  When they heard Kiefer's name - they always replied, "the actor"?  "He does music"?

Yes he does music.  And he does it damn well!

Once inside the venue, normally fans at this venue get a drink, look at the merch area, and/or hang out by the brick wall.  This was the first time all of the above was happening as well as loads of people gathered in front of the stage, making sure they claimed their spot.

After a quick hello to a fellow media colleague (hi Diane) - I made my way to the stage and waited for 7:30pm.

On the dot - the lights dimmed and out came Rick Brantley.  Rick played a solo set (acoustic guitar with harmonica on one song), he quickly and professionally endeared himself to the crowd with his self-deprecating sense of humor and his southern Georgia wit.  You could tell this artist has been honing his craft in front of all sorts of audiences.  He was cool, slick, funny, and genuine.

His singer songwriter country tinged folk tunes were well received by the audience.  Rick finished up his set at 8pm as he said his thank you's.

After a brief changeover, the four members of Kiefer's band took the stage to launch into their 80 minute set (give or take).  Two guitars, bass, and drums, Kiefer then strolled out to much applause as they launched into the first song on his album, "Down In A Hole" - the video inspired "Can't Stay Away".

Clear, clean sound from very professional session-caliber musicians, the band was tight and you could tell that this was actually a band that had been playing out a lot (they've logged a history of gigs into the triple digits now).

They aired "I'll Do Anything" next without a break.  Kiefer on an acoustic Gibson guitar, looked and, more importantly, sounded the part of a country artist on Sunday night.  His whiskey soaked raspy vocals harkening back to some of the country greats of yesteryear (Cash, Haggard) as well as folk and rock artists, if you didn't know who he was, you'd swear he was a seasoned music artist.

His in-between song banter was heartfelt and raw - no bullshit.  He was very grateful to have people come out on a Sunday night "to hear songs they don't know" by a guy they know from their television and movie screens.

Kiefer co-wrote every song on the album with his good friend Jude Cole, who also produced the album.  Very few realize that Kiefer was involved with the music industry many years ago with a record label.  His reverence for the music artists that he loves and admires comes through in every interview he has done about his band.  The word is respect.  He dare not step into a recording studio or onto a stage unless he felt he could honor what all of those have done before him.  And let me tell you something - when he played Sunday night at the Tractor Tavern, you could tell this was the truth.

You can't fake your intentions to those of us that are music junkies in the press.  Well, you can try but it won't work.  Music is a personal journey that requires the artist to go all the way with their artistic expression, to step over that line.  If they don't, the audience won't either.

Kiefer Sutherland took all of us beyond that line of mediocre artistic expression into a pure musical autobiography of his life.  There was nothing to hide behind.  No chance to "do another take".  It was all or nothing.  And he gave it his all.

Playing nearly every song off the record, along with a few choice covers from influences like Petty, Dylan, and Lightfoot (my particular favorite of the night I might add), the audience at the Tractor Tavern witnessed an artist showing that he will not and cannot be defined by his most popular calling.  Kiefer Sutherland showed that he is a musical artist to be reckoned with.

The band makes it's way throughout the US before heading overseas this summer.  Do yourself a favor.  Check your preconceived notions at the door and go into the venue ready to have a good time with Kiefer Sutherland - musician.

Special Thanks:  Scott and Kelli for the credentials!  Thank you very much! 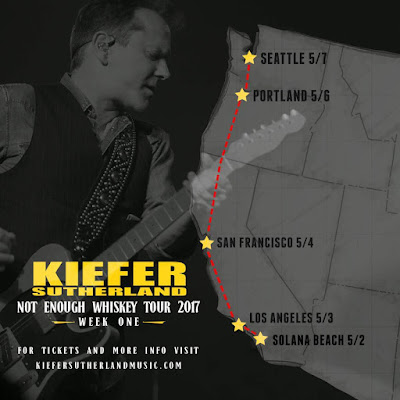 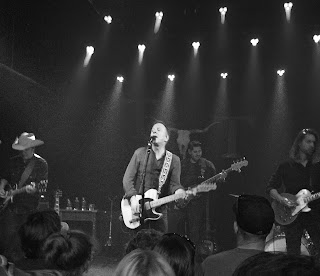 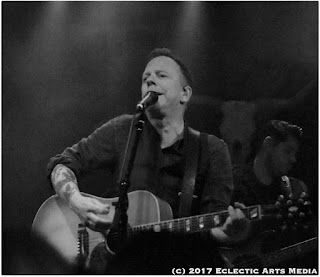 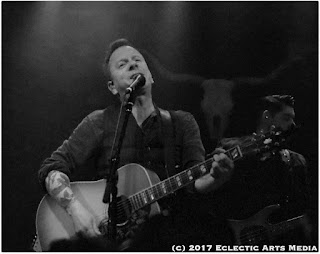 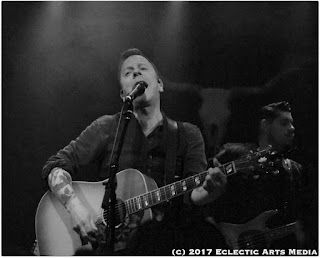 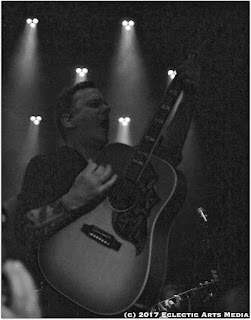 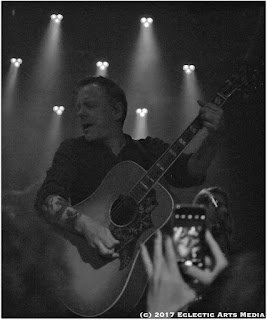 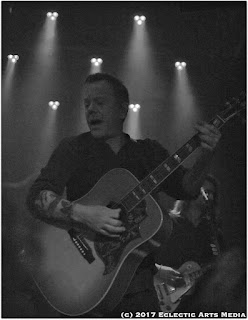 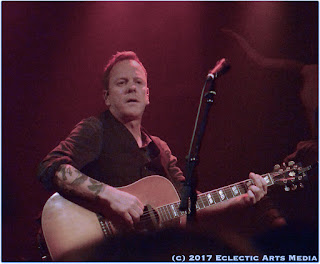 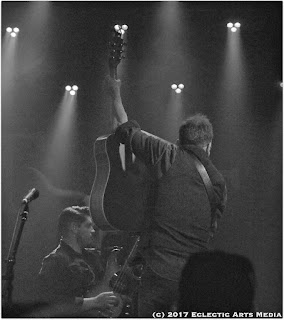 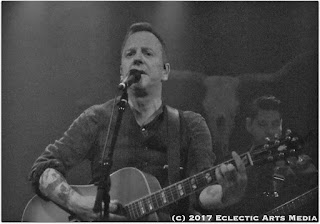 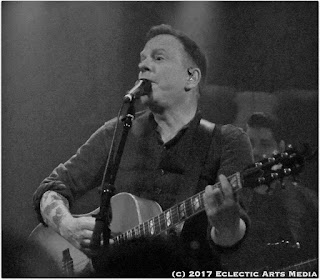 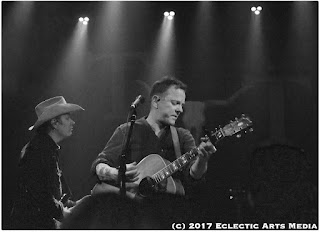 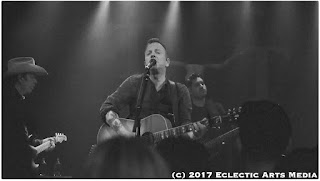 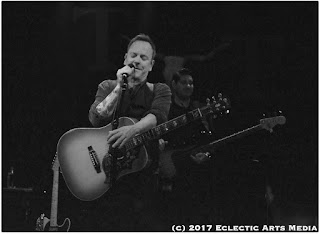 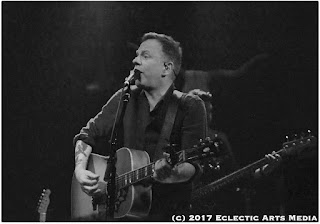 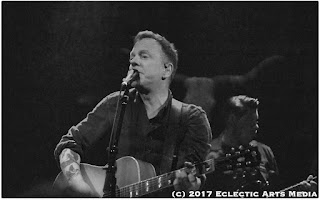 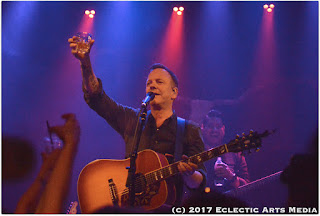 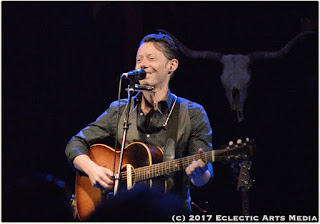 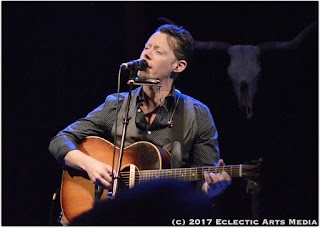 Posted by Eclectic Arts at 1:12 PM