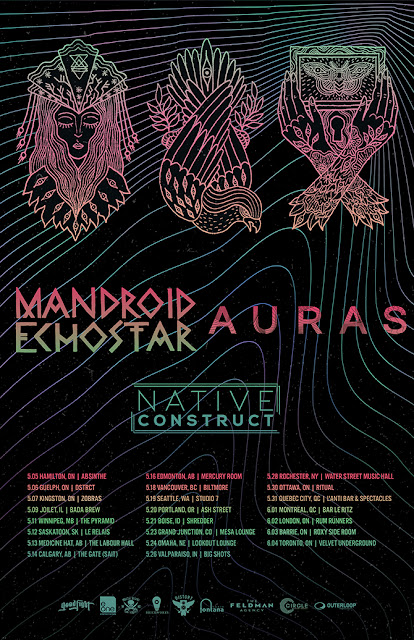 I saw the calendar for Studio Seven over a month ago.  There was a gig in May that caught my attention.  I wasn't familiar with any of the bands so I looked them up.  All three touring bands were listed as progressive metal which was interesting to me being a musician myself.

The first band I checked out was Mandroid Echostar - a Canadian six piece.  I liked what I heard.  Native Construct are a five piece from Boston, MA and were more progressive than my usual tastes but they were interesting.  Auras is a Canadian four piece - a really odd mix of musical styles.  I was intrigued so I put it on my calendar.

It was a Thursday evening at Studio Seven, the weather had reverted back to being typical Seattle (i.e. grey and showery) where just a mere week ago we were in the mid 80's and sun.  As I got close to the doors, based on the cars parked outside, I could tell the show was going to be sparsely attended which was unfortunate.

After checking in, I arrived just in time for the local band.  Designer Disguise is listed as a heavy rock band on their Facebook page.  A five piece band, they played a short but energetic set.  They threw in a cool cover of a 90's boy band tune (go check them out to figure which band).  The last tune had a few bars where the guitarists harmonized some (two finger) tapping - I was sold.  It was nice to see some local talent with actual talent.

Next up was Native Construct.  The most progressive of the bands on the bill, they were nearly flawless in their performance.  A short 30-minute set of music that spanned more than just progressive metal.  That title is too limiting for Native Construct.  Top-notch musicianship.  Their bassist stood out in terms of stage presence.  A very talented band that helped build to the band I came to see. 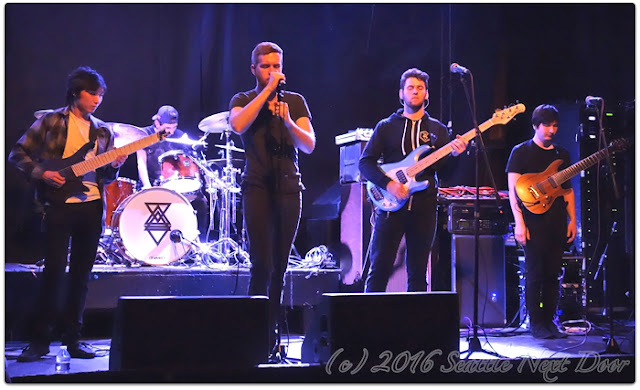 Mandroid Echostar have been working at their craft for four plus years.  With progressive elements mixed in with various types of metal as well as rock and other genres, the band took the stage ready to play their first ever gig on U.S. soil.

The energy from the band was twofold - they sounded like a band well beyond their four years of existence.  Secondly they were having fun.  Imagine that?!  A band actually enjoying themselves.  It was great to see a band playing complex music that wasn't always complex, know what I mean?  These guys can play but they also know when to break down the parts so they are more palatable for the more mainstream listener. 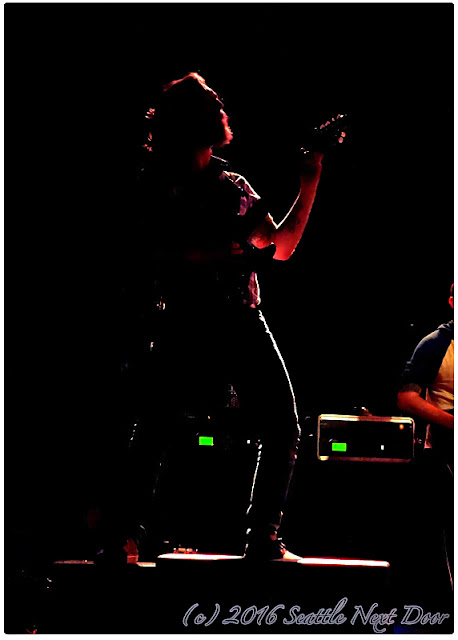 Plenty of harmonized guitar leads, time signature changes, heavy headbanging parts, mixed with some incredible melodies, Mandroid Echostar impressed the Hell out of me.  Anyone that knows me or follows Eclectic Arts knows that's a pretty big statement at this point in my career.  I love discovering new bands.  This goes back as far as junior high school.  I'm a music junkie of all genres.  I know when I see a band that is worth getting behind.  Mandroid Echostar is one such band.  Why this band is not bigger is baffling to me.  This needs to be remedied EA readers. 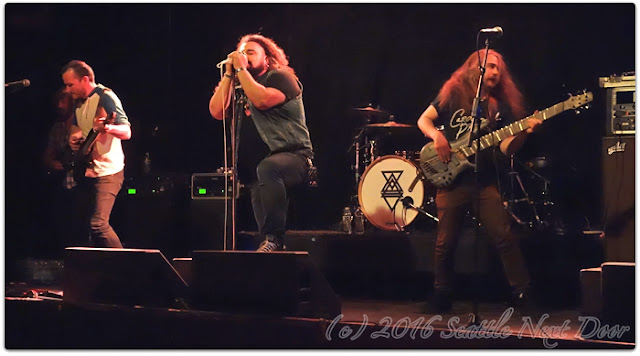 The band is playing a series of shows between Canada and the northern U.S.  They hope to land on a bigger tour in the fall.  In the mean time, if you have the opportunity to catch them on this tour, do yourself a favor and GO SEE THESE GUYS!  You will not regret it! 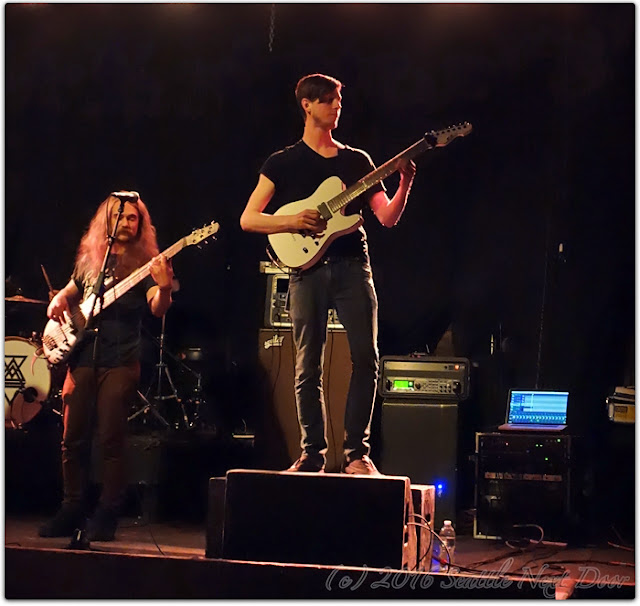 Fans of bands as diverse as Dream Theater, Fates Warning, Iron Maiden, Symphony X, some of the European power metal bands like Rhapsody and Sonata Arctica, will find something to like with Mandroid Echostar.

I must mention that bassist Adam Richards bangs with the best of them.  He reminded me a bit of the late Cliff Burton.  He has his own vibe going on when he's playing his six string bass.  You can't teach that.  It's just a part of who you are as a person and a performer.  Good stuff! 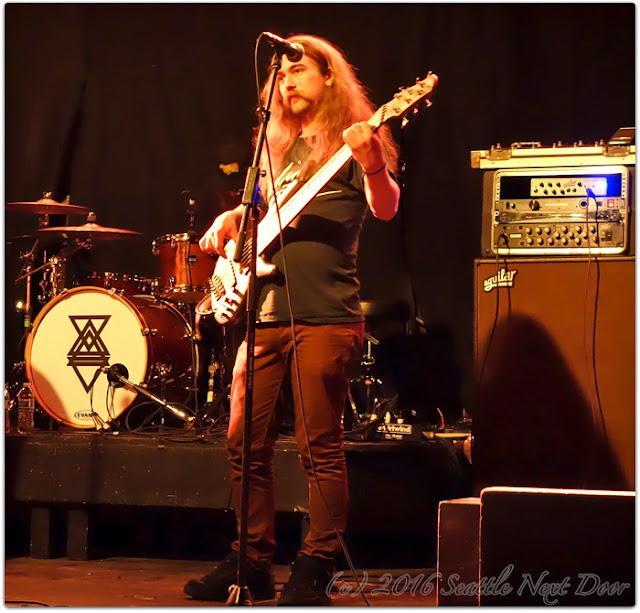 During the last tune, "Ancient Arrows", the band banged across the board toward the end of the song (see the video at the end of this review).  Entertaining in every way - this band has it all!

I chatted briefly with the guys after the show - specifically Michael (vocals).  Totally down to earth guys just enjoying themselves on this inaugural jaunt through the States.  Look for big things from this band! 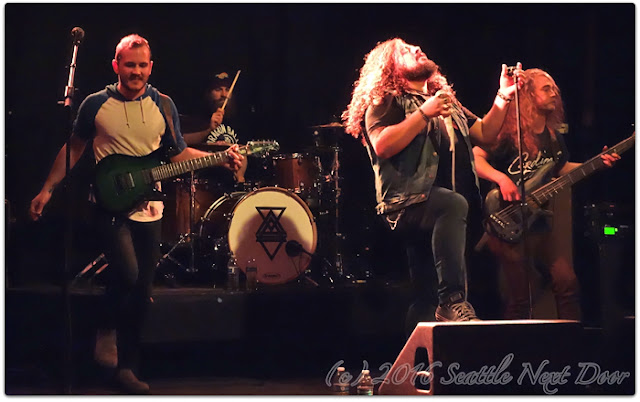 How do you top Mandroid Echostar?  No offense to Auras but, respectfully, you don't.  Auras was a really unique mix of genres.  The almost metalcore vocals are going to be off putting to the progressive metal crowd but not to me (being a death and black metal fan).  The band features two guitarists with no bass player to speak of.  The music was such a wide mish mash of styles that it's really hard to describe.  This makes them original which is a damn hard thing to do these days but it also makes them hard to market.  Again, great musicianship like the other bands on this tour, the band gave it their all even though at this point the already small crowd at Studio Seven shrank by a few more people. 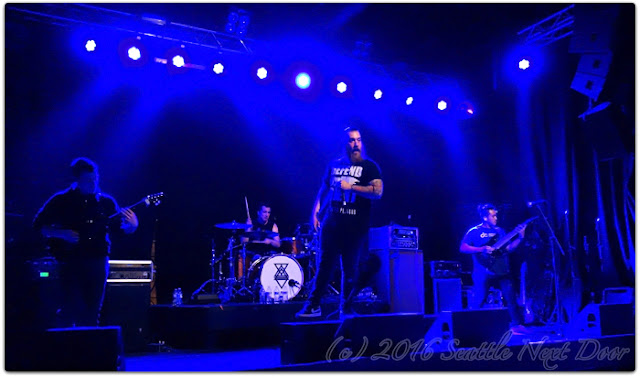 Overall - this was a solid night of music.  No weak links in the bill.  Mandroid Echostar was the stand out band of the evening for me but all of the bands were quality.  Check out the bands online and definitely check this tour out if you're lucky enough to have it hit your town.

Special Thanks:  Sam for guesting me, Mandroid Echostar for putting on a great show - I'm a fan for sure, and Studio Seven and their staff.