The Showbox at The Market
Seattle, WA
February 23rd, 2016

The Inquisitional Torture Tour 2016 rolled into Seattle this past Tuesday evening.  Cradle of Filth consisting of Dani Filth (founder and vocals) and the band Richard Shaw - (gtr), Ashok - (gtr), Daniel Firth - (bass), Lindsay Schoolcraft - (vocals/keys), and Martin Skaroupka (drums) were on the road supporting their latest musical excretion, "Hammer Of The Witches". 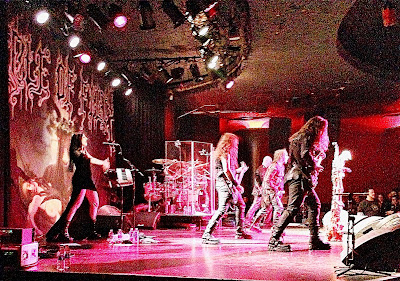 A long time fan of the band since 1997, this was my third time seeing them live - ironically at the same venue The Showbox at The Market (a mere block or two from the famous Pike's Place Market in downtown Seattle - yes, where they toss the salmon back and forth to the delight of tourists every day) each time:  2001 (Midian), 2009 (Thornography), and 2016 (Hammer of The Witches).

Having passed the twenty-year mark as a band and still going strong, Cradle of Filth remains as polarizing as ever.  You either love or hate them.  I haven't met many metal heads that are in the middle on this British export.  At this point, it doesn't really matter, nor did it when they were just coming up in the early to mid '90's.  Their catalog of music and tenure demonstrate that, regardless of what you think of the band, they soldier on creating their own unique brand of extreme metal music.

The new album is a terrific mix of old and new Cradle of Filth.  Massive atmosphere, tons of melody, with damaging blast beats, intertwining with Lindsay's ethereal vocals, this lineup is arguably the best they've ever had as one whole, cohesive unit.  While the early records will always hold a dear place in my blackened heart, there's no denying that this lineup is creating some damn fine music.  Not to mention the band as a live unit.  Speaking of which - on to the review!

Opening the show at 7:30pm was Australian act Ne Obliviscaris.  There was some confusion as to the start time.  Some outlets reported an 8pm start.  Others said doors at 7:00pm.  Since I was covering the gig for Eclectic Arts, I was there well before the doors opened per standard protocol.

A six piece, the band performed their brand of diverse, musically driven death metal.  With both clean and extreme vocals, the band created a sonic-scape that covered several genres of metal.  The musicianship was top notch.  Some of the fans that were there early were clearly fans of the band.  With each subsequent song, the energy in the room grew to a point that by the end, of the set, the crowd was chanting for more.  This tour is going to do wonders for them.  As Iron Maiden once did early in their career, they are planting seeds here in North America.  When they return, they will only get bigger and better.  A band to watch for sure!

Next up were Butcher Babies from the U.S.  While I was familiar with them, I was on the fence about their music.  Their performance on Tuesday, while highly energetic, did little for me.  They weren't a bad band, just not my type of metal.  Dare I say they have a metal sound more in tune for a younger audience - who clearly loved the band, by the way.  Again, it just wasn't my cup of tea.  The pit was wild at this point and the band got the energy level up another notch so kudos to them for that.  But, after a few songs, I was ready for Cradle of Filth to take the stage.

The lights dimmed and the familiar strains of "Humana Inspired To Nightmare" from "Dusk and Her Embrace" blasted through the PA.  Each band member walked to the stage one by one, with Dani being the last to take the stage.  With their ever-present backs to the audience stance that they've done since the early days, they launched into "Heaven Torn Asunder".

Let me tell you something, I've listened to "Dusk and Her Embrace" a few hundred times.  Yes, that's not a typo.  That disc went from my home stereo to my car stereo and back in 1997 without fail each and every day.  I would lull myself to sleep each night with those tunes - true!  So, for me, hearing those two tunes back to back like on the album just brought me back.  Way back.  I knew it would be a memorable night!

Performing a mix of songs from almost every Cradle of Filth release, there was something for everyone.  I was particularly glad to hear live staple, "Cruelty Brought Thee Orchids" early in the set as well as, "The Principle of Evil Made Flesh".  "Malice Through The Looking Glass" was also brought back into the set, which was a nice selection.

The new tunes fit right in the set.  "Yours Immortally", "Blackest Magick In Practice", and the first single/video "Right Wing Of The Garden Triptych" that they tore through with relentless abandon.  The new songs showcased just how good this current lineup is live.  Guitar sweeps by both Richard and Ashok, the vocals of Ms. Schoolcraft, the monster drumming of Martin, along with the mighty bass tones from Daniel, just made them a force to be reckoned with Tuesday night.  While I've always been a fan of former drummer Nick Barker's drumming, Martin proved back in 2009 that he was more than an adequate replacement when Adrian (who replaced Nick) split from the band.

Dani's vocals have been criticized in recent years.  The man has been brutalizing his vocal cords for over twenty years now.  Taking that into account, he can still scream when needed, and yes, his vocal delivery is not what it once was, but it worked for me.

"From The Cradle To Enslave"

The pit was non-stop during Cradle's set along with the surfers.  The band whipped through a nearly two-hour set of music.  They've been changing up the set a bit on this tour, mainly the order of songs, but every now and then a song will pop up in any given city like "Born In A Burial Gown" or some cities got "The Forest Whispers My Name".

"Her Ghost In The Fog"

As Cradle left the stage after the numerous encores, the crowd chanted for more before the house lights came on and the gig was officially over.

The band is in fine form.  Better than fine form, really.  If you haven't seen Cradle of Filth before, now's the time!  Check them out on this headlining tour!  And get there early so you don't miss Ne Obliviscaris, too!

A video interview with Dani was scheduled but never materialized.  I can only guess that the days schedule got in the weeds, as they tend to do on tours.  I want to sincerely thank their tour manager though Mr. Lamb for following through with the guest list for me.  I appreciate it!

I would also like to thank Liz C-B (Earsplit PR) for arranging the whole thing (guest list/photo pass/interview contact) for me.  Her timeliness with communication and professionalism made the process as smooth as could be.  Much, much appreciated Liz!

The t-shirts for this tour were $25.  After having seen both AC/DC and Black Sabbath this month (and their $40 t-shirt prices), it was a pleasant sight to see what Cradle of Filth was charging for shirts.

Richard Shaw has quite the personality - funny facial gestures while on stage.  He came off stage a few different times to walk into the crowd while still playing.

Dani got a Creature From The Black Lagoon tattoo while here in Seattle - which he thanked the artist and stated that it still "fuckin hurt" while they played on Tuesday.

If someone had told me that Cradle of Filth would be where they are nearly twenty years after I first heard their music, I would have been somewhat skeptical.  I'm glad to see where their musical journey has taken them.  At this point in 2016, they can go anywhere they want, as the sky really is the limit for this band.