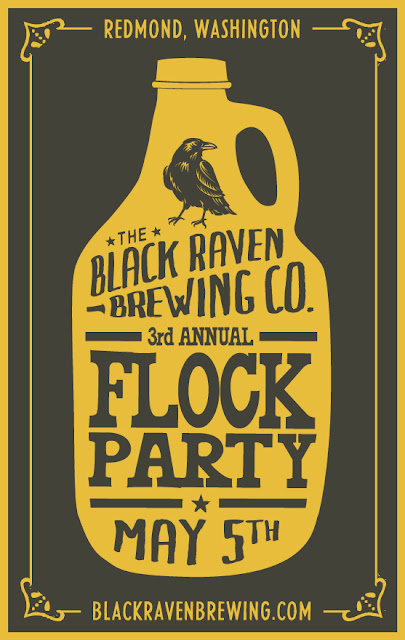 Saturday May 5th, 2012 was the third anniversary for Redmond's Black Raven Brewery - aka the Flock Party.  Beer, food, live music, and beer drinkers.  And a lot of them!

The event started at Noon and closed down at 9pm.  I arrived a little after Noon to find a line of about 30 people getting ID'd and branded (wristbands).  A number of cars were pulling into the various parking lots and a good number of people were already on the premises.  With the sun already peaking out from behind the clouds, the weather was going to ensure a great time for both brewery and customers alike.

One thing I've always liked about Beaux and his crew at Black Raven, from the very beginning, is that you can always tell that someone has put some thought into the execution of everything they do, a real vision of how they present themselves.  The Flock Party was no exception.  From the soft opening of the brewery back in April of 2009 to three years later, a few expansions later, a few more staff later, hundreds if not thousands of kegs later, I always feel like I'm going along for a fun, well planned, ride when I visit Black Raven.  And that's a nice feeling.

This was my first flock party (for shame, I know, especially being a Founding Club member at BR since they opened their doors).  I drove by it in 2010 but had already had a bit too much beer prior.  2011 I have no idea what I was doing - totally dropped the ball on that one.  So this year I was determined to make it.  It just so happened I had to be over in Kirkland that weekend anyway so that made it that much easier.  Flock Party 2012 here I come!

After going through the ID line, the first thing you saw to the left was a map with a lay of the land.  Again, smart, someone planned this well.  Tables to the right, then the live music stage (complete with tent and a PA that was piping the music all over the grounds this time around).  The brewery was of course open in the usual areas inside.  Outside in the back they had the retail booth set up (aka merch).  There were more tables as well as two pouring stations (mainly rare beers).  A water station.  And in between the front and the back were three food vendors.  Oh, and an ATM machine that wasn't working at the beginning (but was eventually fixed).  Porta potties in the very far back (much needed and appreciated too) rounded things out.

The signage was spot on - clearly marked above so one could read what was pouring at each of the two outdoor stations along with information sheets on each beer.  They had signage at the Cask Fest that was also smart (signs on tall sticks so you could see from far away what they were pouring and if they were out) so this didn't really surprise me.  I tell ya - again - well planned out and much appreciated by this beer drinker.  Sometimes, it's the little things.

Me being me I wanted to check out the rare beers in the back first.  As I was looking through the signs above the first pouring station, who is standing to my left?  THE Ravenmaster (says so on the back of his work shirt) himself Beaux.  Beaux made sure to tell me to check out all the stations as there are different beers at each one, including some of the more rare ones.  I started with Splinters (the bourbon barrel aged Scotch ale).  If you've ever had it, you know it's freakin Heaven in a glass.

BTW:  all the beers were either 10 oz or 16 oz.  The main lineup were 16oz (along with a few others) while the rare beers were 10oz.  $3 for the 10oz, $4 for the 16oz.  The smaller sizes were good as it allowed you to try more beers throughout the day.  And it allowed more people to try them as well.

Back to the beer.  After savoring my Splinters, I meandered over to the other rare beer pouring station and had the Snicker Doodle Stout on Cask (which I also had at the Cask Fest in March).  I continued to roam around, watched some of the first band play (which featured a Black Raven staff member and a regular customer on the harp for a few songs).

A few of the Malt N Vine guys were there having fun - saw Justin roaming around and talked a bit with Jason.  Andy Lapworth was there having a good time as well.  And, of course, Kraven T. Raven was on the premises.

I roamed inside for a bit and grabbed my third beer - the ever loving Wisdom Seeker.  I hadn't had it in awhile (missing it's appearances in the taproom as well as the bottles) so it was nice to taste all that hoppy goodness again.

Time for a food and water break.  Can't go wrong with meat in tube form when you're having a beer so that was my choice.  Old standbys Flying Saucer Pizza had a kiosk as well as the great taco truck Los Chilangos were the other choices.

By this point the crowd was getting a bit heavier in numbers but still very manageable.  I grabbed another beer: the Possum Claus on cask.  After munching down my meat and chips, it was time for the next beer:  the Kitty Kat Blues blueberry pale on nitro at station 2.  Now, for all you beer geeks that just scoffed at me for doing the nitro beer; screw you - heh.  The beer was great - reminded me of a blueberry muffin of sorts - and it was a full pour as well - yippee!

The next band on the stage was Four On The Floor - classic rock cover band led by the Washington Beer Blog's Kendall Jones.  Kicking off their set with some SRV is just fine by me!  "Pride and Joy" baby.

At this point, I really wanted to stay longer but I decided to leave for a bit, grab a relative, go visit another brewery for a quick pint (Hi Steve and Sharon at DB!), and then maybe head back to the flock party.

But before I left, I craved more knowledge: time for another Wisdom Seeker!  Woo hoo!

Toward the end of History For Sale's set (sorry guys I fucked up again - one of these days I'll catch a whole set) - I returned to the flock party and met up with some other friends.  Quite buzzed at this point (and, no, I was NOT driving - just to let you know), I decided to head back to the rare beer area and see what was left.  Grandfather Raven was calling my name.  Love that beer!

There was definitely a large crowd at this point but, again, an overall great vibe.  I stayed for one more beer which was the Gunpowder coffee beer at station two inside.  And after that, I knew it was time for me to call it a night.....or late afternoon.  Yeah, I'm a lightweight.  Sue me.

I want to thank Beaux, Kat, Karen, Nigel, Kraven T. Raven, Kyle, and the entire crew at Black Raven for putting on a party with class, thought, and that trademark Black Raven fun style!

I picked up a flock party t-shirt and headed home.  If any of you stayed from 5pm until closing, let me know what I missed.  I bet I missed something worth writing about.

But I'm glad I didn't miss this year's flock party - it was a blast!

Posted by Eclectic Arts at 9:34 PM