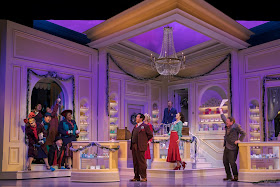 The cast of She Loves Me
She Loves Me production photo.
© 2020 Tracy Martin
Property of Village Theatre.

I've had the privilege of reviewing all of the main stage shows at the Village Theatre Everett now for a year. In that time I've come to expect a certain level of excellence regardless of which show is on stage at the time. From throwbacks to more modern productions to fan favorites, all of the shows at the Village Theatre have been presented with a high level of excellence across the board.


Over opening weekend (this review has been delayed due to illness - not a good time to be sick in the Seattle area) I got the chance to see the newest production, "She Loves Me". Directed by long time Taproot Theatre alum Karen Lund, the show is based on the films - the Jimmy Stewart classic, "The Shop Around The Corner" and the Tom Hanks and Meg Ryan update, "You've Got Mail".


The show was presented in such a way that it immediately harkened back to the late 30's - in this case in Europe. From the wonderful wardrobe design to the creative staging (I loved how the shop opened up much like a book would), the audience was transported back to a different world, not only from a business point of view (employees waiting to work with each customer as they came into the shop), but from a personal one as well.


Main characters Georg (played by Eric Ankrim) and Amalia (played by Allison Standley) both work at Maraczek's Parfumerie. They have an instant dislike for one another on the job. However, both have been secretly writing to a "friend" over the months, developing a pen pal/more than a pen pal relationship. What they don't know is that they've been writing to each other. The plot is set and the show unfolds from there.


The show is full of musical numbers, choreographed dance numbers, and a fair bit of humor. Director Lund kept the show light throughout; this was not a heavy dramatic production.


The cast, which also included Rafael Molina, Mark Emerson, Taryn Darr, Randy Scholz, Eric Polani Jensen, Tony Lawson, Matthew Posner, and the ensemble actors, was up to the task at hand all night long. Their acting, singing, and dancing chops were put to good use and the show never took a dip in talent during either act I or II.


"She Loves Me" was a great entertainment escape for two plus hours and, in light of the current situation in Seattle, much needed by many in attendance. Do yourself a favor and check out an upcoming performance. It's just what the doctor ordered!


Special Thanks: Ann - thank you so much for the opportunity and the opportunities over the last year! I'm looking forward to future productions!


"She Loves Me" plays through March 22, 2020 at the Everett Performing Arts Center. Purchase tickets here:  TICKETS!