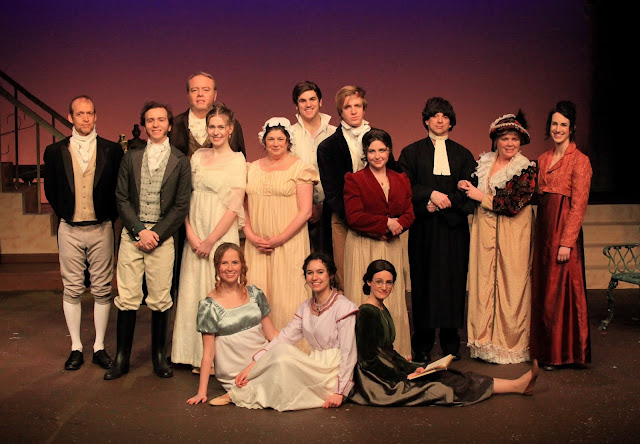 
The newest production from the Edmonds Driftwood Players is a longstanding favorite, “Pride and Prejudice”. The famed Jane Austen story has been adapted numerous times both for the stage and screen.

The production on Sunday afternoon left me frustrated. Let me explain why.

I’ve been covering arts related events for a few years now. I still consider myself new compared to those that have decades of experience behind their reviews. What I’ve come to find at any given theatre is that a certain standard can be expected from most companies. Even if I didn’t care for a particular show, I can still admire and respect what was presented on the stage. I also know before going in that a certain bar will be met in terms of excellence.

My frustration comes from companies where they have been inconsistent with the quality of the shows they put on. It reminds me of working with a student that has great potential (they all do) but consistently comes up short of that potential. I see it, others see it, but the inconsistency is frustrating (but understood).

The acting in, “Pride and Prejudice” was good. No issues there. I recognized some of the cast from previous Edmonds Driftwood Players productions as well as from the Phoenix Theatre. In particular Karin Terry was excellent in her leading role as Elizabeth Bennet. Her four sisters were also cast well (Hanna Destiny Lynn as Jane, Rachael Schlimmer as Mary, Laura McFarlane as Lydia, and Miki Murray as Kitty). Mr. Bennet played by Mark Gladding was also a solid actor as was Annie St John as Mrs. Bennet. Her real life husband Asa Sholdez was great in, “Ladies Man” at the Phoenix Theatre and wore many hats (in some cases literally) in this show. Again, no issues with the cast at all.

Since I am not a Jane Austen connoisseur, perhaps it’s the material. I have seen another production of her material that was a joy to watch, though. I actually saw it three different times. So, it’s probably not the material. I feel I do not know enough (yet) about how the directing and other production aspects affect any given theatre show. All I know is that I really, really wanted to like this play and I didn’t.

The first act fell flat for me. I was expecting a bit more wit and humor throughout but there was scarcely any. The fact that the audience was pin drop quiet for the majority of the scenes echoes my sentiment. The second act was a bit better but not as much as I had hoped for. I wanted to care about the characters, about the eventual romance between Elizabeth and Mr. Darcy. I wanted to grab on with both hands and really dig deep into this play. But, I found myself grasping at empty air.

As always, I don’t like writing reviews that are overly harsh and critical. They serve no purpose in my mind. Being someone that has been on a stage before, I do know what it takes to get up there and put yourself out there for all to see. So, please keep in mind that just because the show didn’t resonate with me doesn’t mean it won’t resonate with you.

As my plus one and I were exiting the theatre (she shared my observations about the show), I overheard a few people talking to themselves about how much they enjoyed the performance. So, who knows? If you’re already a Jane Austen fan then you’ve either already seen a performance or you plan on attending one soon. If you are like me and you don’t have the lengthy background experience with Jane Austen material, I’m curious to see what you’ll think of the show.


Thanks:  Amy for the opportunity.  I appreciate it!