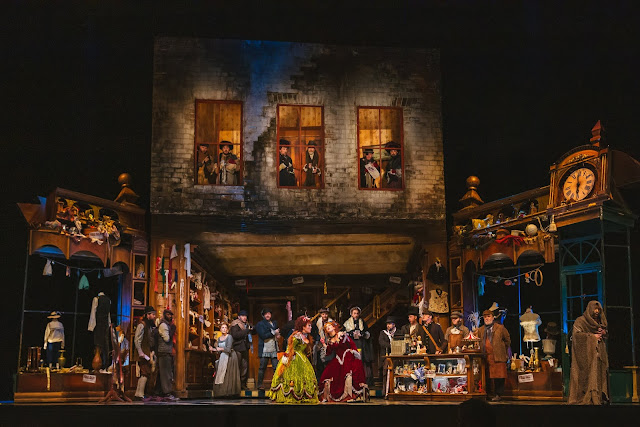 It has been a busy week or two here at Eclectic Arts. I tend to simplify by saying we have an Arts side and a Music side (all are arts but again simplification). The Music side overtook the Arts side recently with a slew of concerts. However, the Arts side made a comeback with a one two punch of events this weekend.

The Seattle Opera's second production of the 2019-2020 season, "Cinderella" with music by Gioachino Rossini and libretto by Jacopo Ferretti, was opening on Saturday night at McCaw Hall. I was very much looking forward to this event!

In recent weeks I've had friends ask me why am I covering so many arts events instead of concerts - and vice versa. I'm still working on my separate article about my introduction to the arts world and what brought me here but that won't be finished for a long while.

As this was my fifth opera so far, I find many facets of the opera world interesting. The history for one, the stereotypes of the average opera attendee (some true, most not), the classical music, the staging, the artists, the lighting design, the event feeling of an opening night, everything really. There is so much to explore and learn about I've only covered about 1% so far. It almost seems endless but I'm making headway, slowly but surely.

With a production like, "Cinderella", there were many in the audience that had particular expectations of what they wanted to see.

I tend to arrive early to take in the audience vibe before the doors open to the auditorium. I do this at the theatre, the musicals, the concerts when I can, etc. A Seattle Opera crowd on an opening night is one of anticipation. Of pageantry at times, of going out on a Saturday night and putting on your best outfit that you rarely, if ever, get to wear anywhere else. It is also an opportunity to escape for three hours into a world of etiquette, manners, and general pleasantry. This point I have come to really love. No pretense - just a nice reminder that there are folks out there that practice common courtesy. Compared to some of the other events I cover, mainly concerts, this is a refreshing breath of air that I never tire of.

On Saturday night all of the above was evident, and then some. The difference this time was there were more families, more young people, and of course it made sense. Most people associate, "Cinderella" with the Disney princess version from the 1950's - including me.

Rossini's, "Cinderella" was different in many ways. This could have been off putting to some but not to me. I rather enjoyed the differences between the two stories.

The perfect slippers, mean stepmother, fairy godmother - all absent from this production. Instead there was a mean step -father (played by Peter Kalman), a somewhat similar character to a fairy god - father in Alidoro (played by Adam Lau), and bracelets instead of slippers.

But, there were things that were absolutely similar. Cinderella (played by Ginger Costa-Jackson) was completely treated like trash by her stepsisters Clorinda (Miriam Costa-Jackson) and Tisbe (Maya Gour). Prince Ramiro (portrayed by Michele Angelini) was enamored with Cinderella. The prince's valet Dandini (portrayed by Joo Won Kang) was the ever loyal servant to the prince.

Act I clocked in over an hour and a half. Act II was just under an hour. During that time, the Seattle Opera transformed the auditorium stage into a massive study and an incredible two-story shop that doubled as a balcony for the end of the show. I have been really floored by the stage productions at all of the Seattle Opera events thus far. I would love to see some of the creativity and artistry they use incorporated into the concert world. For example - the 3-D aspect of the grounds of the kingdom was expertly presented. When characters were in the background, they looked like they were a mile away vs. the foreground characters that were right in plain sight.

While the cast was exceptional across the board, I really enjoyed the acting in this production, something I may have overlooked in the other shows I've reviewed. Peter Kalmant in particular really showed some acting chops as the "president of wine" and the mean step- father Don Magnifico.

Musically Michele Angelini was an absolute head turner of a tenor. I had just covered a tenor on Monday who, while good, couldn't hold a candle, a candleholder, or a birthday candle for that matter to Mr. Angelini.

I already knew how amazing Ginger Costa-Jackson was after seeing her opening night of, "Carmen" this past May. She was equally stunning in the role of Cinderella. It was also good fun to see one of her real life sisters, Miriam Costa-Jackson, playing Clorinda one of the mean stepsisters.

Joo Won Kang had the audience laughing as Dandini - the valet that switches outfits/roles with Prince Ramiro to allow the Prince to investigate a future princess undercover.

Overall, "Cinderella" was full of comedy and less tragedy than you would expect from an opera. I quite enjoyed that fact as I was in the mood for laughter Saturday night.

Being from the Disney fan base like some in attendance, I did miss seeing a grande ballroom scene during the production, but I know this was a centuries old take on the story, not the 2-D animated film.

"Cinderella" weaved a tale as old as time but in a classic and sophisticated way. My hope is that those that have not attended a Seattle Opera production give this show a chance. One day your opera may come and let me say it's here - "Cinderella".

See you at the opera!
Mark Sugiyama
Eclectic Arts
EA on FB


Special Thanks: Gabrielle - as always thank you very much for the opportunity! I sincerely appreciate it! 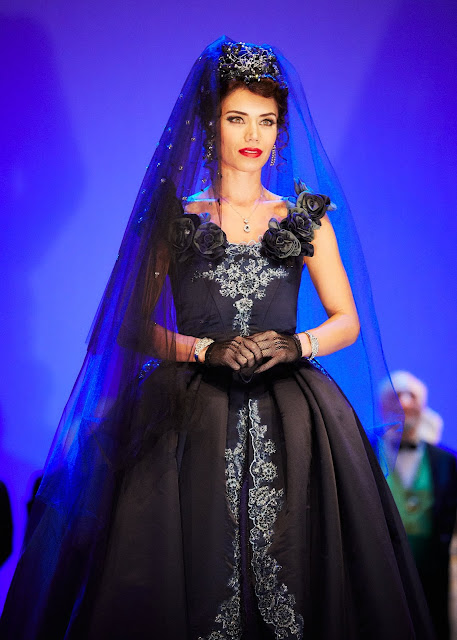 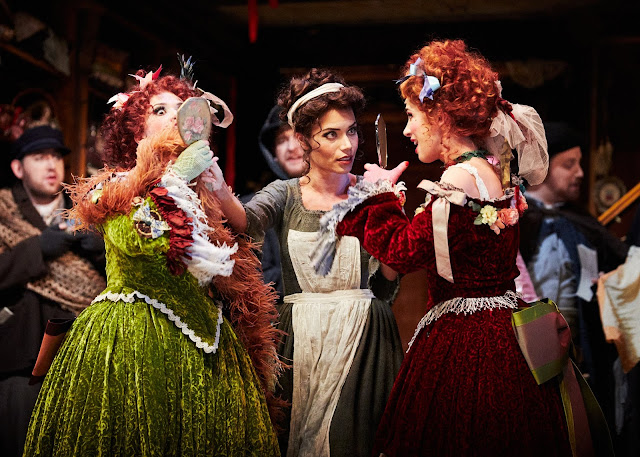 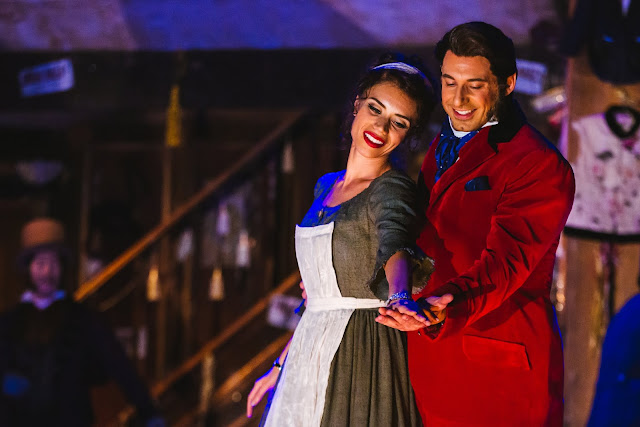 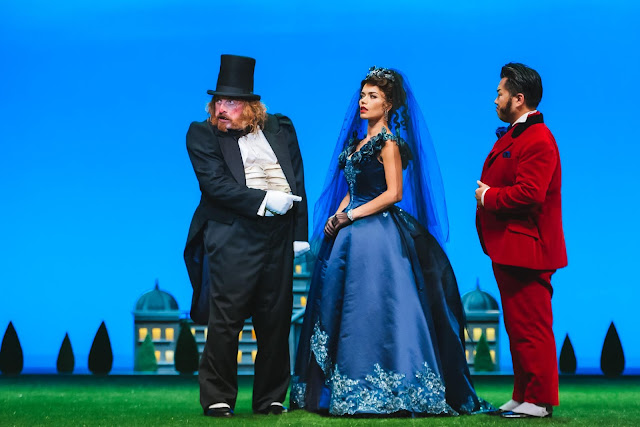 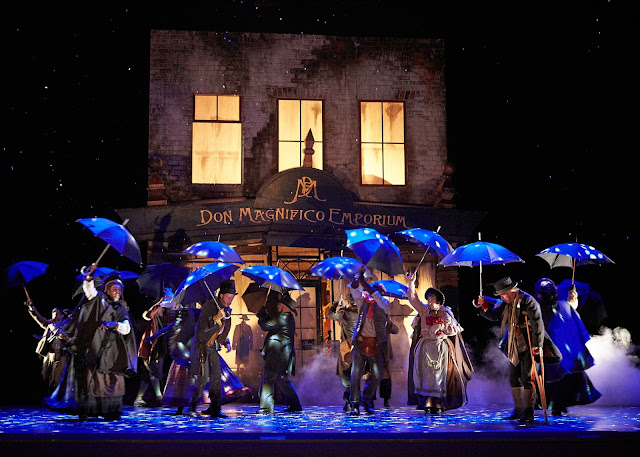 Posted by Eclectic Arts at 1:58 PM