We Will Not Be Silent
by
David Meyers 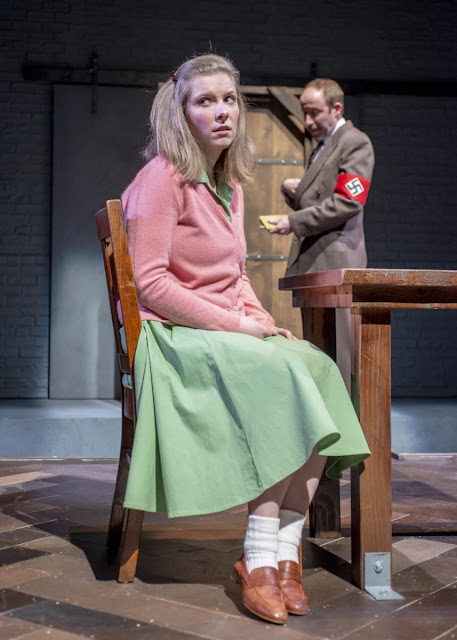 Amy Helms and Jonathan Stutzman in We Will Not Be Silent at Taproot Theatre. Photo by Erik Stuhaug.

The majority of theatre Eclectic Arts has reviewed over the last nine months has either been comedy or has had a dose of comedy mixed within the production. "We Will Not Be Silent" was definitely a serious drama based on the real life story of a very courageous young woman named Sophie Scholl.

Set in a prison cell in Germany, circa 1943, "We Will Not Be Silent", as directed by Scott Nolte, spent the next ninety minutes going through the final hours of Ms. Scholl (Amy Helms), her brother Hans Scholl (Ben Wippel), and the interrogator Kurt Grunwald (Jonathan Stutzman).

A voice for youth activism, 21-year old Sophie Scholl was part of a group called the White Rose in Germany, a movement that did not agree with the current Nazi state of Germany nor its politics and procedures. Writing and distributing literature about their beliefs, the White Rose was viewed as propaganda by the Nazi's and was one of many targets by the Nazi's to uncover and destroy.

The play spends the majority of the time between Sophie Scholl and her interrogator Kurt Grunwald. Using tactics to break Sophie of her will, the interrogation scenes were coy and subtle at first and then direct and life threatening the second.

There were also scenes with Sophie and her brother Hans, also a member of the White Rose. These were told as the interrogation continued.

By the end of the production, the verdict is in and the show ends. You'll have to attend a performance to see what happens. 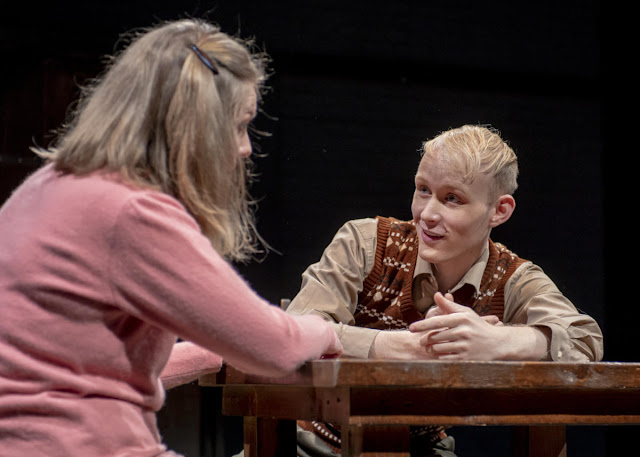 Amy Helms and Ben Wippel in We Will Not Be Silent at Taproot Theatre. Photo by Erik Stuhaug.

Jonathan Stutzman as Kurt Grunwald stood out during the production. He portrayed his character with believability, ruthlessness, and compassion. Not an easy thing to do considering the circumstances.

Amy Helms as Sophie Scholl was puzzling to me. As the other central character, if not the central character, her portrayal of Sophie left me on the fence about Sophie's convictions. At 21-years old it made sense that Sophie would go back and forth between holding true to herself and giving in to the demands of Kurt so she could be set free. Perhaps I was looking for a more willful character that stood her ground the entire time during the interrogation. Upon further thought, that wouldn't be realistic at all - and the back and forth made more sense after spending some time with the performance.

Ben Wippel played Hans as direct as he could, with a level of empathy and support for his sister Sophie. He also doubled as the guard when Hans wasn't in scenes. I would of liked to have learned more about his characters back-story. 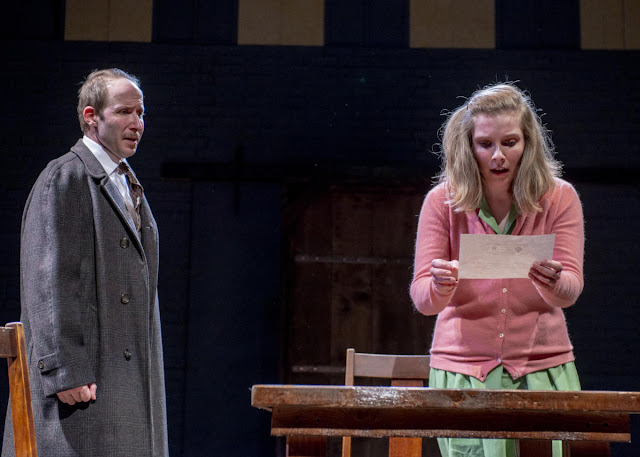 Jonathan Stutzman and Amy Helms in We Will Not Be Silent at Taproot Theatre. Photo by Erik Stuhaug.

I have spent the majority of my professional career working with diverse populations of young people in community-based organizations (non profits). From special needs, at risk youth, and foster care just to name a few, I have worked side by side with co-workers that walked during the civil rights movement. That protested outside on the streets of Seattle Community College, the University of Washington, and other local hotspots during the 1960's and beyond.  Issues of equality for people of color, women, the LGBTQ community, and many more have all been front and center in my life's work.

Activism - youth and adult - is something that's not a sideline sport for me. It is something I was immersed in for a number of years based on the type of work I did.

It will always be important for an individual to stand up for what they believe in, to go against the popular opinion, and to question authority.

In Sophie Scholl's case, this young woman risked her life to stand up for what she believed in.

In these times we have seen other figures in the news doing something similar to great controversial effect. Silence is not always golden. Sometimes it takes one person to break that code of silence to reveal a deeper truth about our society, our government, and our way of life.

"We Will Not Be Silent" challenges you to think, examine, and ultimately decide - will you stay silent?

"We Will Not Be Silent" runs through April 27th. Buy tickets here:  TICKETS!