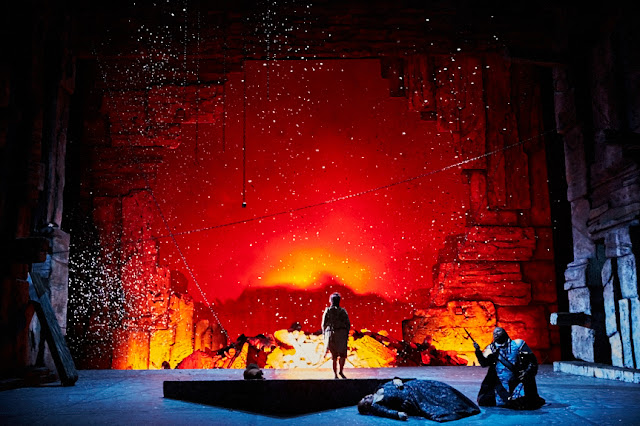 
Well, jumped may be a bit of an exaggeration. For many of you the opera world is both unfamiliar and possibly a bit intimidating. The little we know is from television and film where an opera is the location for a particular scene, etc. With that limited knowledge comes stereotypes and assumptions. Since this was my first opera performance ever, I am writing this review from that vantage point; for the common person or new opera attendee. 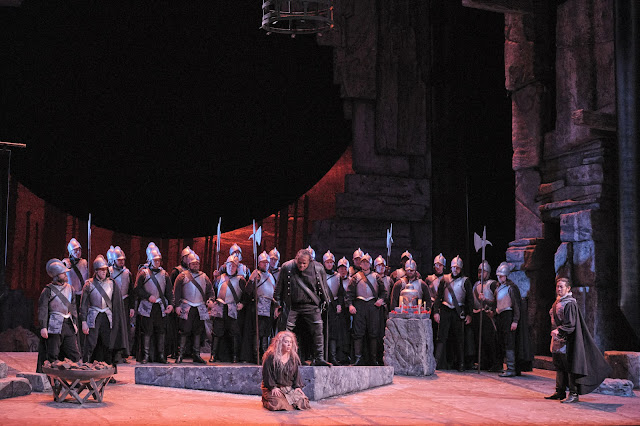 
I am in no way an opera enthusiast (not yet at least), intellectual, or expert. I'm sure there are dozens of local media outlets that can dissect and interpret any opera performance better than I. For that reason, I am not going to dig through the opera performance itself as that would be foolish. But, I am going to write about my overall experience at McCaw Hall Saturday night. 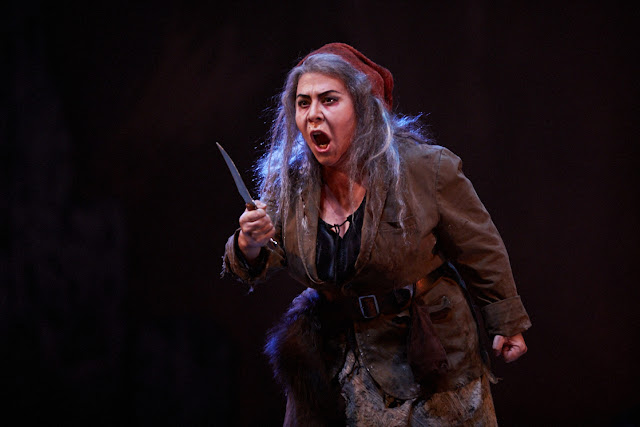 
I arrived early to ensure parking (besides using the $20 garage) and was pleasantly surprised with street parking a mere block and a half away. I followed a well-dressed group across Mercer Street and unsurprisingly found we were all headed to the same location - McCaw Hall.


I picked up my tickets at the will call office and went upstairs to pass the time before the doors officially opened for seating. 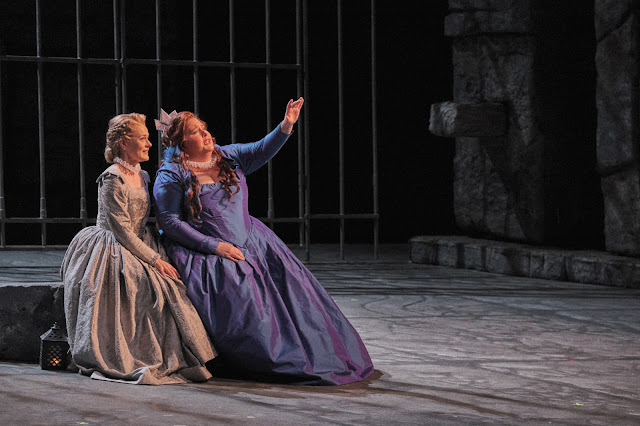 
As I looked over the entrance below, I noticed the variety of people attending the show. Yes, there were more formal than casual dressed attendees which I expected. But I did spot the occasional pair of nicer blue jeans, a pair of tennis shoes (usually paired with a suit or more formal attire - the "in" thing with many broadcasters these days), etc. Having just attended a pair of ballet performances, I would say this crowd was not as casual as what I spotted at the ballet but, as it was stated in a program, don't let your attire (or lack thereof) keep you from coming to a performance. Wear what is your best - which may not be the best of the person next to you. Know what I mean?


I can say that the tuxes and lavish gown couples were actually fun to people watch for. They looked like something out of a film or magazine ad - and actually made me feel like I was at "the opera" for lack of a better description.


I also noticed plenty of phrases such as "excuse me", "pardon me", "thank you", and the like - also a nice welcome at the opera. Being a seasoned media outlet of concerts in the area, being around people with actual manners is a pleasure. I'm not knocking my concert brethren, but it's just a different crowd. Let's leave it at that, shall we? 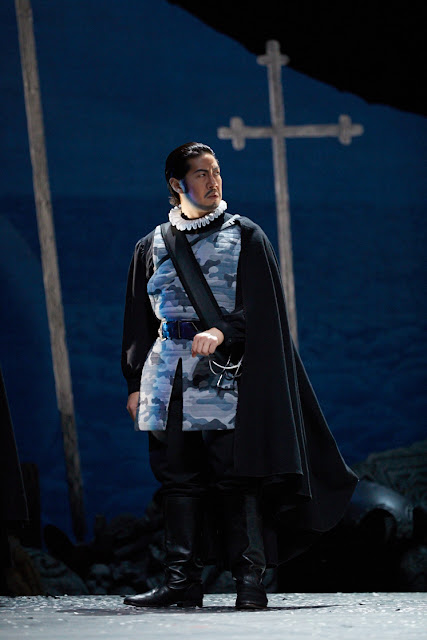 As I sat down before the performance, the vibe in the hall was very much of an event. It was after all a Saturday evening, the opening night of IL TROVATORE, and you could feel the warm anticipation of the performance.


The screen (for lack of a better term) was down and there was a large bar across the top of the stage where the subtitles would be shown. For the other new fans, think of your TV when it shows subtitles on the bottom or has a sports ticker with information on the bottom of your screen - only this was at the very top of the stage at McCaw Hall. This opera was in Italian so to follow what the performers were singing, the words were in English above the stage.


From my vantage point on the main orchestra floor, the combination of stage viewing and subtitle reading was perfect. However, if you were closer to the front rows, I would imagine it would be difficult to read the translation due to the high angle above. Of course those patrons may already know the story or perhaps even know Italian, so who knows? But if you were half way back on the main orchestra floor, it's a perfect sight line. 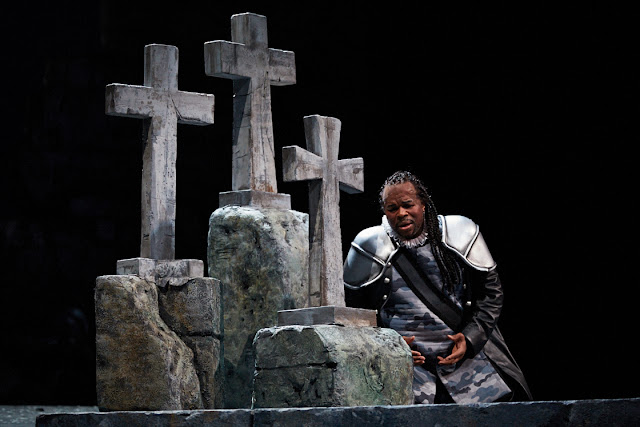 
The scene design, lighting, and costumes were worthy of any musical I've covered thus far. I know painstaking hours go into all of the above and it showed. Much like a movie set, the opera set transported the audience into the world of Count Di Luna, Leonora, Manrico, Ferrando, Inez, Azucena, and Ruiz.


I have a music background but in no way do I have one on the level of the opera performers on stage. I only mention this as one of my biggest question marks prior to the performance was how would I be able to handle the two hours plus of operatic singing.


My only exposure to such singing is with symphonic metal bands and/or classically trained singers. I can also add a few of the musical theatre cast members that have opera backgrounds but my exposure is limited to say the least. 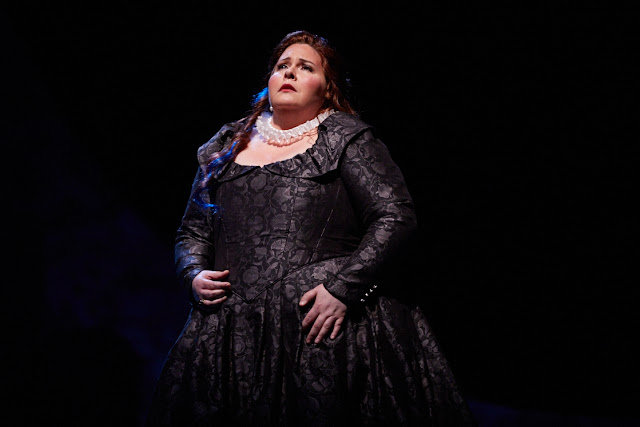 
Much to my delight the constant operatic singing never bothered me during the performance. If anything - I noticed how grand much of the singing was. In particular Lester Lynch as Count Di Luna and Leah Crocetto as Leonora really stood out to these ears. Powerful, nuanced, evocative, and captivating, both performers took hold of their roles and brought me into their world.


The story as I mentioned earlier I'll leave to the opera experts but for me - the tragedy within the story was indicative of the time when the opera was written (common theme) but also worked with the captivating score.


Again for the new opera fan the show is long: an hour and 15 minutes before an intermission with an additional 67 minutes or so to conclude the performance. Also - there were signs letting folks know that you will not be permitted inside once the performance starts. Unlike a theatre show where you will have to wait until a suitable time to let latecomers in, at the opera you are out of luck. So, be mindful of the bells chiming to alert you to get to your seats or you will miss out. 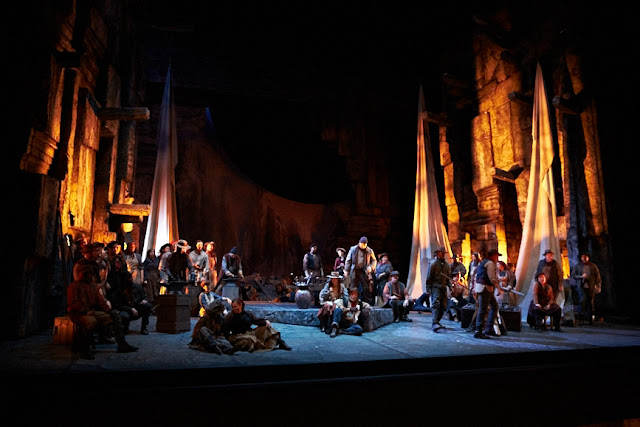 
Inbetween scenes as the set was changed, it was clearly a January performance in the Northwest as there was plenty of coughing, sniffles, and blowing of noses. To the point that it was making the audience laugh during the first scene change. With each subsequent scene change it became clear that if you need to cough, try to wait (or get it out of your system) during these scene changes so you're not interrupting the actual performance.


Overall my first venture into McCaw Hall for a performance from the Seattle Opera was highly pleasurable. If you're going for the first time, read up on the show beforehand, allow plenty of time the day or night of the performance, and then go in to the hall with an open mind. I think you'll leave as I did - satisfied.


See you at the … opera!
Mark Sugiyama
Eclectic Arts


Special Thanks: Gabrielle for the credentials - thank you very much for the opportunity!  I'm looking forward to the next production.